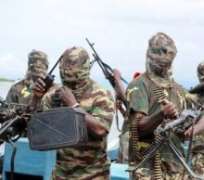 The Niger Delta Avengers, NDA, on Wednesday, called for restructuring of the country, declaring anybody opposed to it, including the Federal Government as enemy.

The group in a statement by the spokesperson, self-styled “Major General” Murdoch Agbinibo, also vowed to resume another round of attacks, in the next few days” on oil installations in the Niger Delta region if government refused to listen to the new demands, including control of ownership ofresources and release of detained Niger Delta activists.

“While promising a brutal outpour of our wrath, which shall shake the coffers of the failed Nigerian nation, our demand unambiguously is for the government to restructure this country.”

“We wish to state in plain terms that anybody against restructuring is an enemy of this country and particularly an enemy of the Niger Delta Avengers; and we shall not rest until such enemies are defeated by the Niger Delta People who earnestly seek to control our own resources,” the group added.

NDA warned in the statement, entitled, “Happy Doomed Year Nigeria – Get Ready for Operation down FSPO”: “This round of attacks will be the most deadly and will be targeting the deep sea operations of the multinationals, which include Bonga Platform, Agbami, EA Field, Britania-U Field, Akpo Field; amongst others, littered across the deep waters of the Niger Delta region.”

“As for the Egina FPSO, we are advising the operators to let it stay wherever it is right now as we are tracking its movement. We mean it when we say they (the oil installations) shall dance to the sound of the fury of the Niger Delta Avengers. Good a thing the ocean is wide enough to accommodate as many wrecks as possible,” it said.

The statement reads indetails:
“The high command of the Niger Delta Avengers wishes all Niger Deltans a happy New Year as we admonish the Nigerian Government to brace up for the doom we have finished all arrangement to unleash on the oil sector in a few days' time.

“On the 15th of January 2018, being the 62nd historic remembrance day of the 1956 discovery of commercial oil by Shell Darcy in the now forgotten and dejected Oloibiri community in the Niger Delta; the high command of the ND Avengers summoned a meeting of all our operatives from across the Niger Delta to review the progress of our operations so far and deliberate on the planned actions for the future.

“It was agreed in that meeting that the killings and division presently playing out in Nigeria along divergent grounds makes this the perfect time to restructure this country. No more pay attention to N'Delta elders “On the 3rd of November 2017, we promised to reactivate 'operation red economy' but as usual some overzealous and over patriotic elders intervened and appealed as they have done twice before then for us to avail them some more time to attend to the demands of the Niger Delta as championed by the Niger Delta Avengers.

“That we have not achieved any meaningful results despite the opportunities we have availed the Niger Delta elders means that they are either irresponsible or the Nigerian government is not sincere with them as it is their trade in stock. “Because of the above, we have resolved not to listen to the Niger Delta elders as we unravel our New Year package to the failed Nigerian state this time around.

“We wish to state in plain terms that anybody against restructuring is an enemy of this country and particularly an enemy of the Niger Delta Avengers; and we shall not rest until such enemies are defeated by the Niger Delta People who earnestly seek to control our own resources. We want to control our resources “We want to control our resources and directly use them to better our lot instead of been enslaved and made to beg before crumbs are released in a dress rehearsal-like manner to intervention agencies that are ineffective at addressing our challenges.

“While 1 billion dollars from the Excess Crude Account is been released to fight Boko Haram in the North; successive government acts blind to the very bold array of challenges our region from which this wealth is generated are facing, as they (the Nigerian Government) derives pleasure in sending their unprofessional and weak military to invade our communities and subject our already sick and suffering people to more hardship and poverty,” NDA asserted.

“Only a few days ago, the Nigerian Army released 244 members of the murderous Boko Haram sect to Borno state government, while thousands of innocent Niger Delta youths continue to suffer in various prisons across the country for no just cause.

“It is on the above premise that we are demanding the immediate release of all Niger Deltans activists and freedom fighters that are held captive by the Nigeria Armed Forces,” it said. On the recent killing of kidnap kingpin, Kareowei and his combatants, NDA said: “The extrajudicial cold blooded murder of Kareowei and 20 members of his gang by the Nigerian Army after deceiving them with Amnesty offer is very unprofessional.”

“Yes they were common criminals who brought pain to our own people, but going ahead to murder them after reaching an agreement with them and making them to surrender to the army is a clear pointer to the insincerity of the Nigerian government at handling issues that concern the Niger Delta.

“Just like the Nigerian government daily deceive the International Community on how professional the multinationals are carrying out their operations and how vast they have developed our lands when the reverse is actually the case on ground.

“Let the Kareowei issue be a lesson to all freedom fighters across the Niger Delta, never to fall for the antics of the insincere Nigerian government; put the fear of death aside and fight till the last drop of blood whenever you are engaged in a gun duel with the Nigeria Army as it is this same path we have chosen to glory.

“Again, the Niger Delta Avengers wish Nigeria a doomed 2018; courtesy the skilled hands of our fierce and smooth operatives across the Niger Delta,” the group said.