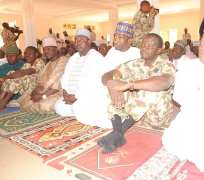 The Director Islamic Affairs 7 Division, Nigerian Army Maiduguri who is also the Chief Imam of Maimalari Cantonment Jummaat Central Mosque, Colonel Usman Musa has prayed for the peace, unity, stability and progress of the country Friday.

He also prayed for the protection and guidance of the leaders of the country, the service chiefs, theater commander, GOCs, officers and soldiers deployed to Operation Lafiya Dole north East Zone.

Delivering a sermon before the Congregational prayer, in the mosque, the Chief Imam reminded the congregation that every soul will pass through death, as such, he advised Muslims to be properly prepared for the death by doing good works.

He also said that worshipping God always and properly or correctly, observing prayers finely, being honest, righteous, God fearing and sincere in dealing with others or transacting and interacting with anybody will pave way for one to be in Paradise

The Director Islamic Affairs added that God has already prepared Muslim faithfuls to face trial on the Day of Judgement or the Last Day sending the Messenger of God (SAW) to teach muslins the religion of Islam and how if should be performed, the dos and donts as well as the right ways to do things including giving out zakkat among others.

He urged Muslims brothers and sisters to pray for the souls of the fallen heroes and their families that they left behind.

Colonel Musa further called on people to also pray for those officers and soldiers alive at the war front fighting the insurgents while praying for their successes in the counter insurgency operations.

The Governor of Borno State, Alhaji Kashim Shettima also led a state delegation to attend the Friday special prayers of the fallen heroes and the funeral prayer of the late gallant officer at the Maimalari Cantonment Maiduguri to mark the 2018 armed forces Remembrance day leading top government officials.