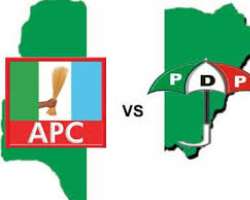 Destiny Ugorji
The Imo State chapter of the Peoples&rsquo; Democratic Party - PDP has taken a swipe on the Imo State Government over its denial of the over Ninety-Three Billion Naira (N93b) debt profile of the state, describing its statement on same as false and erroneous.

In a Statement issued by the State Publicity Secretary of the PDP, Damian Opara, Thursday and made available to The Agenda online, the Party described as annoying, a statement credited to the Chief Press Secretary to the Governor, claiming that the said debt was an accumulated one from the creation of the state.

&ldquo;The attention of Peoples Democratic Party (PDP), Imo State chapter has been drawn to the false, erroneous and inaccurate statement credited to Sam Onwuemeodo, the Chief Press Secretary to Imo State Government where he allegedly claimed that the State Government under Rochas Okorocha is not indebted to any bank anywhere in the country or outside the country. The Imo State Governor, speaking through his Chief Press Secretary also claimed that the current N93.27 billion Imo debt profile was an accumulated debt right from the creation of the State in 1976.&rdquo;

&ldquo;The above provocative comment is not only laughable and misleading, but highly ludicrous and preposterous which can only come from a government that has lost touch, focus and confidence of the people.&rdquo;

&ldquo;This statement, no doubt is coming over the failure and inability of Governor Rochas Okorocha to provide credible answers, and address issues of economic importance as raised by the combined team of Imo economic experts and technocrats operating under the aegis of Imo Economic Development Initiative, who visited the Governor on Friday 5th January 2018 to discuss the unending economic stagnation and falling standard of Imo economy under the watch of the State Governor.&rdquo;

Continuing, the statement reads: &ldquo;among other issues raised by the members of Imo Economic Development Initiative which included but not limited to the increasing and rising domestic debt status of Imo State which has astronomically ascended to N93.27bn as at Dec 2016, the issue of falling State Economy, Donor Agencies, Tricycle ban without providing alternative remedy, lack of industrialization and low IGR, alarming and increasing poverty rate of Imo State, etc.&rdquo;

&ldquo;Instead of Gov. Okorocha providing credible answers on how, when, where and why the increase in the debt profile of Imo State Government came about and how the money was expended on behalf of Imo people, the Governor resorted to blame games, accusing his predecessors of borrowing the huge funds before his assumption of office.&rdquo;

Continuing, Oparah stressed: &ldquo;Imo PDP hereby condemns the alleged plans by Gov. Rochas Okorocha and members of his cabinet to falsefully use blame games and other inculpable means to deny and shy away from rendering account to Imo people on how Imo debt profile rose to over N93bn.&rdquo;

&ldquo;Ndi Imo should therefore remain patient, as every problem has an expiry date and we also wish to reinstate that Gov. Okorocha must surely render account of all his misdeeds and bad governance.&rdquo;