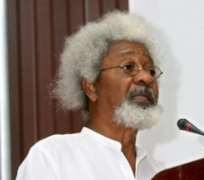 Nobel laureate, Professor Wole Soyinka has added his voice to the outrage over brutal killing of Nigerians by Fulani herdsmen. He says the killer herdsmen have declared war against Nigeria.

Soyinka, in a statement issued on Wednesday said: ”In plain language, they have declared war against the nation, and their weapon is undiluted terror. Why have they been permitted to become a menace to the rest of us? That is the issue!

He also condemned the impunity by which the herdsmen perpetrated their evil activities and government's reluctance to stop them.

He called on the Muhammadu Buhari administration to halt the murderous activities of the herdsmen without further delay.

BELOW IS THE FULL TEXT:
Impunity Rides Again
It is happening all over again. History is repeating itself and, alas, within such an agonizingly short span of time. How often must we warn against the enervating lure of appeasement in face of aggression and will to dominate! I do not hesitate to draw attention to Volume III of my INTERVENTION Series,and to the chapter on The Unappeasable Price of Appeasement. There is little to add, but it does appear that even the tragically fulfilled warnings of the past leave no impression on leadership, not even when identical signs of impending cardiac arrest loom over the nation. Boko Haram was still at that stage of putative probes when cries of alarm emerged.Then the fashion ideologues of society deployed their distancing turns of phrase to rationalize what were so obviously discernable as an agenda of ruthless fundamentalism and internal domination. Boko Haram was a product of social inequities, they preached – one even chortled: We stand for justice, so we are all Boko Haram! We warned that – yes indeed – the inequities of society were indeed part of the story, but why do you close your eyes against other, and more critical malfunctions of the human mind, such as theocratic lunacy? Now it is happening again. The nation is being smothered in Vaseline when the diagnosis is so clearly – cancer!

We have been here before – now, 'before' is back with a vengeance. President Goodluck Jonathan refused to accept that marauders had carried off the nation's daughters; President Muhammadu Buhari and his government – including his Inspector-General of Police – in near identical denial, appear to believe that killer herdsmen who strike again and again at will from one corner of the nation to the other, are merely hot-tempered citizens whose scraps occasionally degenerate into “communal clashes” – I believe I have summarized him accurately. The marauders are naughty children who can be admonished, paternalistically, into good neighbourly conduct. Sometimes of course, the killers were also said be non-Nigerians after all. The contradictions are mind-boggling.

First the active policy of appeasement, then the language of endorsement. El-Rufai, governor of Kaduna state, proudly announced that, on assuming office, he had raised a peace committee and successfully traced the herdsmen to locations outside Nigerian borders. He then made payments to them from state coffers to cure them of their homicidal urge which, according to these herdsmen, were reprisals for some ancient history and the loss of cattle through rustling. The public was up in arms against this astonishing revelation. I could only call to mind a statement by the same El Rufai after a prior election which led to a rampage in parts of the nation, and cost even the lives of National Youth Service corpers. They were hunted down by aggrieved mobs and even states had to organize rescue missions for their citizens. Countering protests that the nation owed a special duty of protection to her youth, especially those who are co-opted to serve the nation in any capacity, El Rufai's comment then was: No life is more important than another. Today, that statement needs to be adjusted, to read perhaps – apologies to George Orwell: “All lives are equal, but a cow's is more equal than others.”

This seems to be the government view, one that, overtly or by implication, is being amplified through act and pronouncement, through clamorous absence, by this administration. It appears to have infected even my good friend and highly capable Minister, Audu Ogbeh, however insidiously. What else does one make of his statements in an interview where he generously lays the blame for ongoing killings everywhere but at the feet of the actual perpetrators! His words, as carried by The Nation Newspapers: “The inability of the government to pay attention to herdsmen and cow farming, unlike other developed countries, contributed to the killings.”

The Minister continued: “Over the years, we have not done much to look seriously into the issue of livestock development in the country….we may have done enough for the rice farmer, the cassava farmer, the maize farmer, the cocoa farmer, but we haven't done enough for herdsmen, and that inability and omission on our part is resulting in the crisis we are witnessing today.”

No, no, not so, Audu! It is true that I called upon the government a week ago to stop passing the buck over the petroleum situation. I assure you however that I never intended that a reverse policy should lead to exonerating – or appearing to exonerate – mass killers, rapists and economic saboteurs – saboteurs, since their conduct subverts the efforts of others to economically secure their own existence, drives other producers off their land in fear and terror. This promises the same plague of starvation that afflicts zones of conflict all over this continent where liberally sown landmines prevent farmers from venturing near their prime source, the farm, often their only source of livelihood, and has created a whole population of amputees. At least, those victims in Angola, Mozambique and other former war theatres, mostly lived to tell the tale. These herdsmen, arrogant and unconscionable, have adopted a scorched-earth policy, so that those other producers – the cassava, cocoa, sorghum, rice etc farmers are brutally expelled from farm and dwelling.

Government neglect? You may not have intended it, but you made it sound like the full story. I applaud the plans of your ministry, I am in a position to know that much thought – and practical steps – have gone into long term plans for bringing about the creation of 'ranches', 'colonies' – whatever the name – including the special cultivation of fodder for animal feed and so on and on. However, the present national outrage is over impunity. It rejects the right of any set of people, for whatever reason, to take arms against their fellow men and women, to acknowledge their exploits in boastful and justifying accents and, in effect, promise more of the same as long as their terms and demands are not met. In plain language, they have declared war against the nation, and their weapon is undiluted terror. Why have they been permitted to become a menace to the rest of us? That is the issue!

Permit me to remind you that, early in 2016, an even more hideous massacre was perpetrated by this same Murder Incorporated – that is, a numerical climax to what had been a series across a number of Middle Belt and neighbouring states, with Benue taking the brunt of the butchery. A peace meeting was called, attended by the state government and security agencies of the nation, including the Inspector General of Police. This group attended – according to reports- with AK47s and other weapons of mass intimidation visible under their garments. They were neither disarmed nor turned back. They freely admitted the killings but justified them by claims that they had lost their cattle to the host community. It is important to emphasize that none of their spokesmen referred to any government neglect, such as refusal to pay subsidy for their cows or failure to accord them the same facilities that had been extended to cassava or millet farmers. Such are the monstrous beginnings of the culture of impunity. We are reaping, yet again, the consequences of such tolerance of the intolerable. Yes, there indeed the government is culpable, definitely guilty of “looking the other way”. Indeed, it must be held complicit.

This question is now current, and justified: just when is terror? I am not aware that IPOB came anywhere close to this homicidal propensity and will to dominance before it was declared a terrorist organization. The international community rightly refused to go along with such an absurdity. For the avoidance of doubt, let me state right here, and yet again, that IPOB leadership is its own worst enemy. It repels public empathy, indeed, I suspect that it deliberately cultivates an obnoxious image, especially among its internet mouthers who make rational discourse impossible. However, as we pointed out at the time, the conduct of that movement, even at its most extreme, could by no means be reckoned as terrorism. By contrast, how do we categorize Myeti? How do we assess a mental state that cannot distinguish between a stolen cow – which is always recoverable – and human life, which is not. Villages have been depopulated far wider than those outside their operational zones can conceive. They swoop on sleeping settlements, kill and strut. They glory in their seeming supremacy. Cocoa farmers do not kill when there is a cocoa blight. Rice farmers, cassava and tomato farmers do not burn. The herdsmen cynically dredge up decades-old affronts – they did at the 2016 Benue “peace meeting” to justify the killings of innocents in the present – These crimes are treated like the norm. Once again, the nation is being massaged by specious rationalisations while the rampage intensifies and the spread spirals out of control. When we open the dailies tomorrow morning, there is certain to have been a new body count, to be followed by the arrogant justification of the Myeti Allah.

The warnings pile up, the distress signals have turned into a prolonged howl of despair and rage. The answer is not to be found in pietistic appeals to victims to avoid 'hate language' and divisive attributions. The sustained, killing monologue of the herdsmen is what is at issue. It must be curbed, decisively and without further evasiveness.

Yes, Jonathan only saw 'ghosts' when Boko Haram was already excising swathes of territory from the nation space and abducting school pupils. The ghosts of Jonathan seem poised to haunt the tenure of Muhammadu Buhari.