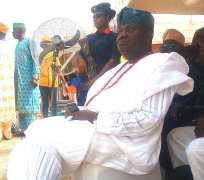 A governorship aspirant in under the platform of the Peoples Democratic party in Osun State, Barrister Adejare Bello today disclosed that his father warned him not to spoil the name of the family and that he has been protecting the name with integrity since he got the warning.

Bello who spoke with The Nigerian Voice on the sideline of the eight day prayer for his father who died last week, said his late father cherish good reputation and that he would continue to protect the name jealously even when his father is no more.

Bello was the Speaker of the Osun State House of Assembly for eight years. He explained that he wants to be the next governor of the state to enable him utilize the experiences he garnered when he worked with three governors as a legislator in the state.

"I have whatever it takes to govern Osun. I worked with the administration of Governor Bisi Akande as minority leader before I became the Speaker. As the Speaker of Osun State House of Assembly, I worked with Olagunsoye Oyinlola's administration for over seven years and I also served as the Speaker for six months during Governor Aregbesola first term. With this experience, I'm well equipped to a good governor and lead Osun State well".