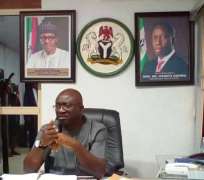 Speaking after the ceremony, Mr. Ukah said their victory at the polls was a confirmation that hard work pays and that there is no short cut to success.

The Commissioner for Information noted that the vigorous campaigns embarked upon by Governor Okowa round all the 25 local government areas in the state, coupled with the ward to ward campaigns by the Chairmen, contributed immensely to the success recorded at the polls.

He called on the Chairmen not to betray the trust reposed on them by the electorate who voted them into power by fulfilling the campaign promises made before the election.

Mr. Ukah reminded them that power comes from God and not through any man, cautioning them to govern with the fear of the Lord so that the people will not regret voting them into office.

The Commissioner for Information called on those who lost the election to cooperate with the winners by contributing their quota to the development of their Local Government Areas since only one person will be in charge at a time.