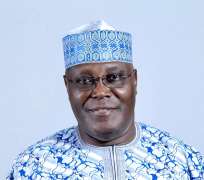 I read the article with the above title with keen interest devoid of any mixed feeling.

No doubt, the article is a direct response to my earlier piece titled: ''Hassan Dankwambo: A Sure Bet for Another PDP Presidency'' which was widely published in virtually all the media organisations in the country.

For me not to expect reaction to that piece especially from the camp of the man believed to own about 70 percent of Nigeria's media space is akin to living in fools paradise.

But, I don't mind about their reaction because, already, I have the firm conviction that Dr. Ibrahim Hassan Dankwambo is Nigeria's next president come 2019. So, whatever is the outcome or the negative reaction from the media machinery of the man means nothing to me because there is a call that is above all calls and that is the call of conviction.

In addressing the issues raised by the said writer which he premised his arguments in favour of Atiku on national popularity, contacts across geo-political zones, huge financial strength and party unity. The writer also employed scare tactics in his argument against Dr. Dankwambo.

Before I proceed, I want to state that destiny is a long journey that materializes with time. So, looking at where Dr. Dankwambo is coming from politically, one will come to realise that God is truly behind the project of making him next president of Nigeria come 2019.

From my understanding of the Holy Bible, God will not send anybody to His people without first of all preparing and equipping the person for the task ahead.

Before sending Our Lord Jesus Christ to the world, God first prepared him for his divine agenda for the whole of mankind.

Also, before sending Prophet Muhammed (Peace be upon his name) to the world, God first prepared him before his entrance in to the world.

Therefore, God took time to prepare Dr. Hassan Dankwambo on financial matters before sending him to go and rescue Gombe State from the acute financial and developmental challenges that had bedeviled it before 2011.

Now that Nigeria is in deep financial mess, God has again anointed Dr. Hassan Dankwambo with greater financial anointing, skills and solution to the people of Nigeria so that he will put smile on the faces of the people once again because God have heard the cry of His people as promised in the book of 2Chronicles 7:14 where the Almighty said ''If my people who are called by name will humble themselves, pray and seek my face and turn from their wicked ways, then I will hear from heaven and heal their land."

Nevertheless, I agree with the writer that Atiku is popular with image problem. He has the financial muscle, he has the national contacts and network but these things are immaterial because he had them when GoodLuck Jonathan defeated him in the 2011 PDP Presidential primary.

Probably, one thing the writer and other Atiku supporters have failed to understand is the fact that power comes from God and that unless the Lord builds the house, those who try to build it will labour in vain.

Hillary Clinton had all the connections, all the popularity, all the network, visited 112 countries and enjoyed the unalloyed backing of her family dynasty, but a little known Senator Barrack Obama of the African-American heritage from the state of Illinois still defeated her during the 2007/2008 Democratic primary in the United States.

Hence, the argument raised against Dr. Dankwambo by the writer in the said article is immaterial because the altimate power lies with God.

Reach him via [email protected]