Umahi, Ebonyi Workforce And The Triumph Of Patriotism 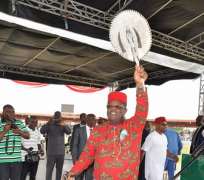 The seams of Abakaliki Township Stadium were pressurized to their limits on Monday, 18th December, 2017 by a great crowd that gathered in the stadium. What attracted the great multitude together was neither a football match nor another routine sports competition. The sea of human heads in the stadium did not belong to participants in an interdenominational Christian crusade as was often the case in the modern stadium. It was none of the usual political rallies which have become recurrent decimals in the ultra-modern sports facility. The ceremony which had all the trappings of a rarity was indeed positively unusual. The organised labour constituency under the leadership of Ebonyi State Chairman of Nigeria Labour Congress, NLC, Comrade Leonard Nkah mobilized their members, invited Ebonyi people, nay the whole world, and in full glare, honoured the Governor of Ebonyi State - His Excellency, Deacon David Nweze Umahi - as Enyi Ndi Oru [Friend of Ebonyi Workers]; adopted Umahi as the preferred candidate of Ebonyi workers in the on-coming 2019 Ebonyi gubernatorial elections; prayed to God for Umahi's victory; and resolved to walk their prayers by voting for Umahi and protecting their votes for him.

One will agree that this occasion is quite unique and that the honouree, Chief David Nweze Umahi, is a positively different governor. This is moreso because at a season like this when the organised labour has been reduced to mere guinea pig and economic punch bag by many state governors, thereby forcing the organised labour into the trenches, no one expected the solidarity and the robust positive emotions voluntarily poured on Governor Umahi by Ebonyi workers in the occasion under review. However informed opinions exist to the effect that the Divine mandate administration's labour relation policies and general disposition to workers were good enough to elicit such humongous goodwill from the workers of Ebonyi State.

In his address at the ceremony, the Chairman of NLC in Ebonyi State, Comrade Leonard Nkah said that the spectacular ceremony was a show of solidarity put together by the organised labour community in Ebonyi State as a token of appreciation for the achievements of His Excellency, Governor David Umahi, for Ebonyi people in general and Ebonyi workers in particular. Comrade Nkah took time to enumerate the litany of Umahi's commissioned and on-going life-enhancing projects in the entire landscape of Ebonyi State. According to the Labour leader, "Umahi has for the past two and half years been improving the lives of Ebonyi people, in general, and Ebonyi workers in particular through the prompt payment of workers' salaries and allowances as well as annual mega bonuses which are known as 13th month salaries at a time when the economic downturn in the country has forced many states with better economic profiles to owe workers' salaries for months; Ebonyi State Government partnership with the Bank of Industries to provide single digit business loans to spouses of Ebonyi workers; the provision of highly subsidized transit buses for Ebonyi workers; the agricultural revolution programme which has provided alternative income and food security for Ebonyi people and the involvement of Ebonyi workers during formation of government policies through periodic consultations".

Beyond the proper and feasible labour relation policies and programmes of Ebonyi State Government, Comrade Nkah went further to explain the nexus between Umahi's projects and the quality of life of Ebonyi people especially the workers: "Even the Abakaliki urban road network as well as other road projects are beneficial to workers because they have reduced the risks and man-hour involved in traveling through bad roads to work as well as princely chunks of funds that would have been spent by workers to repair their private cars. The overhead bridges have decongested the accident and emergency wards and even the mortuaries of our hospitals by preventing the frequent accidents and deaths we used to have at Offia Nwali [Presco] and Akanu Ibiam [Spera in Deo] roundabouts before the overhead bridges were put in place by His Excellency, Chief David Nweze Umahi, our visionary governor. We can go on by mentioning the security of lives and properties enjoyed by workers alongside the rest of Ebonyi inhabitants; the reduction of the degree of dependence on the workers through the empowerment of relations of Ebonyi workers and the involvement of the same workers' relatives in governance as Senior Technical Assistants and Technical Assistants and so on". Nkah concluded his address by appealing to the Governor to expedite actions on his promise his promise to offset the arrears of workers' leave allowances and retirement benefits.

High points of the spectacular occasion was the adoption of Governor David Nweze Umahi for second term by the Ebonyi State labour constituency and the conferrment of the chieftaincy title of "Enyi Ndi Oru Ebonyi State" on Chief David Umahi by Ebonyi workers!

It could be recalled that a cordial relationship between Ebonyi workers and Chief David Umahi began way back in 2012 when Umahi, as Deputy Governor of Ebonyi state, mediated in the protracted face off between the second civilian administration in Ebonyi state and the workers over workers' emoluments. During the 2015 gubernatorial election, workers emoluments metamorphosed into a major campaign issue which, to a large extent, would determine the outcome of the election. The parting of political ways between Chief Martin Elechi and Engr. David Umahi provided the workers an opportunity to pay Elechi back in his own coin. Chief Elechi's wage increment at the twilight of his administration was seen by workers as an action taken in furtherance of political vendetta. As expected, that last-minute wage increment did not yield Elechi the desired results as the workers pitched tent with Governor Umahi and invested their time and great energy in his governorship project. Umahi was sworn in as Governor of Ebonyi state at a time the economy of the state, nay the country, was set for a free fall. This made the hope of payment of workers' salaries a mirage and reduced the promise of even a single capital project to mere wishful thinking. Given that economic circumstance, the need to strike a balance between Umahi's campaign promises of enhanced remunerations to Ebonyi workers and the competing need to develop Ebonyi state and the rest of her people who are outside the organized labour force became both imperative and urgent.

Notwithstanding the delicate situation, courageous and plain-dealing Umahi called Ebonyi organised labour to a roundtable where the cards were laid. Therein, the labour wages were brought within the realm of feasibility to the chagrin of the opposition which had hoped to make political capital out of the issue. The full meaning of Governor Umahi's action dawned on Ebonyi workers when states like Edo, Ondo, Abia and Imo began to owe workers salaries for periods between seven months and one year; Benue State Governor praised himself for ensuring that Benue workers received one month salaries in every quarter of the year; Kaduna State Government sacked thousands of workers; and Kogi workers began to hang themselves out of frustrations arising from unprecedented arrears of wages and salaries!

However, Umahi not only paid Ebonyi workers promptly, he equally increased their salaries by 5% on 1st October, 2016, introduced the payment of annual salary bonuses otherwise known as 13th month salaries in Ebonyi labour parlance and provided them routes to alternative income through the agricultural revolution and the Bank of Industries single-digit business loans. When the economy started showing signs of recovery, the embargo on promotions were lifted while the backlog of arrears of leave and other allowances were cleared. Statutory allowances of Ebonyi workers were equally worked into their monthly salaries to make their salary structure truly consolidated. All these culminated in the restoration of healthy industrial relations in Ebonyi state which yielded the event of 18th December, 2017. To discerning minds, the event of 18th December was simply a celebration of the triumph of patriotism over the individual or sectoral intentions of both government and the organised labour in Ebonyi state: In truth, even though Governor Umahi could not give Ebonyi workers 50% salary increment, he has given the workers all that is possible in the present economic environment. In the same vein, even though Ebonyi workers have not gotten all the desired working conditions, they are content with the possible best in the present economic weather. This is practical sacrificial patriotism; and it is both commendable and emulable! Many other states in the federation which are still on the tenterhooks of industrial crises are hereby enjoined to learn from Ebonyi - the salt of the nation.