By The Nigerian Roundtable 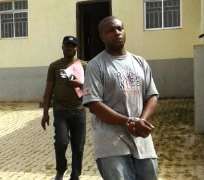 London, United Kingdom, 7th January 2018-The Nigerian Roundtable Coalition, a coalition of Nigerian Professionals in Nigeria and the Diaspora arose from its emergency meeting in London condemns in strongest terms the unlawful arrest of Daniel, Tim, and Izuchukwu Elombah by the SARS operatives which was directly ordered by the Nigeria Inspector General Of Police on a libel allegation unconnected to any form

We submit that the arrest of Daniel, Izuchukwu, and Tim Elombah on 1st January 2018 by men of SARS from their country home in Nnewi, Anambra State is condemned in its entirety.

Its a fragrant show of force, disrespect to the sanctity of Human Rights and rule of law under UN Charters on Human Rights as well as abuse of police powers and processes.

The SARS and its collaborative agencies have demonstrated once more nothing but the act of "hooliganism" in uniform" and a complete dereliction of duty, as well as misinterpretation of Nigerian constitution and the enabling act under the enforcement codes.

There has been a revisit of Python dance 3 as Daniel was arrested illegally and gagged under armed guards and man-handled. The above has further reinstated the fear that life and property are no more secured under this current government as the Elombahs were hurled into a waiting vehicle while their wives, kids and siblings watched in shock, as they were later taken to SARS office in Abuja later same day!

We, therefore, call on all Nigerians, the civil societies in Nigeria and in the diaspora, members of the international bodies and those of the diplomatic corps present in Nigeria to rise up against the injustice and the sudden state of Gestapo policing by Nigerian State authorities.

We hereby demand an immediate and unconditional release of Tim Elombah or prefer the charge against him before a court of competent jurisdiction. The Nigeria Police must learn to investigate cases before engaging in illegal arrest of private citizens.