FG hints it may allow marketers to sell petrol above N145 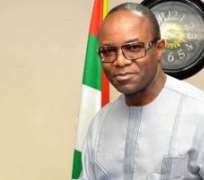 The Federal Government on Tuesday hinted that independent marketers might be allowed to sell petrol above the current regulated pump price N145 per litre.

The Minister of State for Petroleum Resources, Dr. Ibe Kachikwu, gave the hint in a presentation at an investigative hearing organised by the Senate on the lingering scarcity of the product in the country.

He said the N26 differential between the current pump price and the landing cost of the commodity was caused by the rise in the exchange rate.

The minister recalled that naira was 285 to a dollar when the pump price was raised to N145 per litre, adding that the rate would have to drop to N240 to a dollar for marketers to be able to sell at the official price.

Kachikwu stated that the government had come up an 18-month emergency period within which issues affecting supply and pricing of the commodity should be solved.

The minister said the government was considering three models for the regulation of the pump price of petrol, one of which is a “plural pricing system” that would allow independent marketers to either stick with the distribution chain of the government and the official price, or sell the commodity based on the variations in the importation and landing costs.

The minister explained that while the government could retain the current official pump price of N145, marketers who were not okay with its supply chain could be allowed to import and distribute the product independently.

Kachikwu said, “We are looking at an 18-month emergency period. During this emergency period, we need to address the issue of pricing. There is price disparity between the landing cost and the cost of selling. If we must sell at N145 (per litre), we need to put mechanisms in place so that the private sector can go back to importation. We now have a committee that is looking at this and it will be subjected to review.

“The landing cost of the product today is about N170 or N171. The price that we should sell is N145. So, there is a disparity. What that means is that those individuals who are bringing in theirs will not be able to meet their obligations like the NNPC for commercial supply. We need to step back.”

The Chairman of the Senate committee, Senator Kabiru Marafa, who interjected Kachikwu at this point, said the minister had stirred the hornets' net by the statement.

He asked, “Are you saying that the N171 is what an average Nigerian will pay at the filling station or what the marketer will lift from the depot or the cost of importation?”

Responding, Kachikwu said, “Our point is that there is a gap and we need to see how we can fill that gap. There are three mechanisms that we are looking at in dealing with that gap. Whatever we do, giving the constraints of the NNPC in handling 100 per cent of the supply, which may become an overriding burden on the corporation, we need to free the marketers to do their business. To do their business is to address the pricing issue.

Listing the options available to the government to maintain the current pump price, the minister stated that one of the mechanisms being considered was to work with the Central Bank of Nigeria to create a forex policy for marketers to be able to sell at N145.

Another option, he said, was to relax some of the taxes imposed on the marketers in the importation and distribution chain, thereby reducing their running costs.

Kachikwu added, “We are also looking at the potential of – going theoretically to respect the N145 pump price – having a plural pricing system. The NNPC and all its stations, about 400 across the country, will sell at N145. At the same time, marketers are able to import the product at their own cost and sell. It will now be for the individual to stay with NNPC or not. It does not affect the Federal Government on what the NNPC is selling.”

The minister pointed out that unless the pricing problem was resolved, the issues would remain persistent.

A member of the committee, Senator Tayo Alasoadura, who is also Chairman of the Senate Committee on Petroleum Resources (Upstream), asked Kachikwu how the NNPC had been sustaining the pump price.

“We were told that the landing cost is now high, now at N171. The government had gone out with fanfare that subsidy (on petrol) had been abolished but within a year, we are now talking about a landing cost that is high. Did the government not do its homework properly before arriving at N145 per litre?” he said.

Another member, Senator Bassey Akpan, who is the Chairman of the Senate Committee on Petroleum Resources (Gas), also asked why the minister was considering pricing modulation and if he had the approval of President Muhammadu Buhari to modulate the petrol pump price.

Corroborating Alasoadura, stated, “Now that the NNPC is importing at a loss of about N800m to N900m daily, we need to understand how these losses are being treated. You have said you are doing away with subsidy and the NNPC has said tit imports 25 million on the average daily at N26 per litre loss. We need to reconcile that.”

A twist was, however, recorded in the probe when Kachikwu and Baru were about to answer questions posed to them by members of the panel.

Marafa, who had vowed that the Federal Government must explain alleged payment of subsidy without the National Assembly's approval, asked that they ignore questions on subsidy payment.

He said, “Let me state one thing: there are questions asked about subsidy issues. I don't want us to derail. The essence of this sitting is not on whether there is subsidy or no subsidy.

“Answer the questions on subsidy as far as it affects supply, which caused the fuel scarcity. I don't want us to go into issues of subsidy for now at this meeting. The Committee on Downstream is going to pick on that matter immediately and look into it holistically. So, questions bothering on who is paying subsidy should be dropped for this purpose. I don't want us to derail.

“What we want are issues of supplies, where the gaps are and why we have this crisis. These are the hallmark of this problem.”

Earlier in his presentation, Kachikwu described Nigeria's inability to refine crude oil locally as “shameful” after operating a downstream sector for over 40 years, adding that the country could still not make petroleum products sufficient for the people despite having crude oil.

“For the long-term, finally, we must address the issues with our refineries. Like I said in the beginning, the solution to the problem must be the refineries. And whatever it takes, we need to put the refineries together. Once we do that, we are ready to go,” he stated.

The Director, Department of Petroleum Resources, Mr. Mordecai Ladan, stated that the NNPC did not have the capacity to be the sole importer and distributor of petrol.

“The situation is improving. The NNPC is doing its best. For now, the NNPC is the sole importer and almost the sole distributor of this product. The NNPC cannot do it alone. We want the independent and major marketers as well to please come in and assist in this current situation,” he said.

A mild drama played out at the event when three persons introduced themselves as national presidents of the Independent Marketers Petroleum Association of Nigeria.

They are Sanusi Fari, Chinedu Okorokwo and Obasi Lawson.

The development, which occurred during the introductory session, caused a stir at the event.

Members of the Senate committee resolved that only the Executive Secretary of IPMAN, Aminu Abdulkadir, would be recognised to speak for the association.

In his presentation, the Executive Secretary of the Major Marketers Association of Nigeria, Mr. Obafemi Olawore, countered the claim by the Group Managing Director of the NNPC, Dr. Maikanti Baru, that the scarcity was not caused supply shortage.

He alleged that the corporation had shut out private operators in the import and supply chain.

Olawore said, “That is also based on the fact that the government owes us N800bn. We have done several reconciliations directed by the Chief of Staff to the President (Abba Kyari).

“What we are saying is that, going forward, major players should be given major roles to play in the importation process. We can shut all retail outlets but that is not going to stop all the problems.”