Fuel Scarcity: Buhari should stop blame-game, take responsibility for his actions for once - Fayose 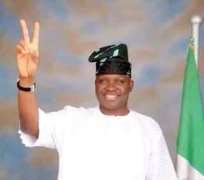 Ekiti State Governor, Mr Ayodele Fayose has carpeted President
Muhammadu Buhari over claim that some Nigerians were deliberately
inflicting hardship on Nigerians by creating the current fuel scarcity
and that he was determined to get to the root of what he described as
“collective blackmail”, telling the President to “take responsibility
and stop blame game for once.”

While speaking on the ongoing fuel scarcity President Buhari had said
in his New Year Broadcast that “Some of our compatriots chose this
period of inflict severe hardship on us all by creating unnecessary
fuel scarcity across the country and that …whatever groups that are
behind this manipulated hardship will be prevented from doing so
again.”

In a statement issued on Tuesday, by his Special Assistant on Public
Communications and New Media, Lere Olayinka, Governor Fayose said;
“The president should rather take responsibility, apologize to
Nigerians and stop blaming others for his failures because apologizing
when you are wrong is the hallmark of honest and sincere leaders. What
is wrong if he had said sorry to Nigerians who are at the receiving
end of his bad policies? But in the case of President Buhari, he will
always have someone to blame for his own failure.

“As a military Head of State, he blamed former President Shehu
Shagari's government. Since he assumed office, he has been blaming his
predecessor. And now that he can't provide fuel for Nigerians, despite
claiming to have removed fuel subsidy, he is blaming some unknown
Nigerians. When is he going to be man enough to stop his blame game?”

The governor said rather than blaming people, what Nigerians expected
to hear from the President was what had been done and being done to
stop the loss of millions of jobs and hunger that is ravaging the land
as well as wanton killings going on across the country.

Governor Fayose said “Nigerians are aware that petrol is scarce across
the country because the federal government deliberately reduced supply
since it is only the Nigerian National Petroleum Corporation (NNPC)
that is importing the product. This is aimed to forcing increment in
pump price from N145 to N185 per litre on Nigerians.”

"Nigerians are tired of Buhari's repetitive speeches and unfulfilled
promises. Nigerians are crying that he should give them responsive and
competent Cabinet.

"Nigerians want the president to create jobs for the suffering masses
and make life more abundant for them.

“As at today, everything is wrong with Nigeria under President Buhari.
The country is not secured. Look at the horrific and disheartening
killings in Adamawa, Kaduna, Benue, Borno and Rivers States between
yesterday and today. The President is totally not in charge of the
country. The cabals only brief him and whatever they tell him is what
he accepts. Nigerians want their president to take charge and stop
buck passing.

“He should show to Nigerians that he is a changed president by
bringing those looters in his government to book.

"President Buhari should gauge public opinion to see that the people
are no longer with him. He should listen to Rev. Father Mbaka who used
to be his supporters but has now been telling the truth of how
disappointed and frustrated Nigerians are with him.

"People are only tolerating Buhari and counting days and times for
them to shove him out of office in disgrace like Mbaka said.”