My response to the Buhari administration's 17 achievements, by Reno Omokri 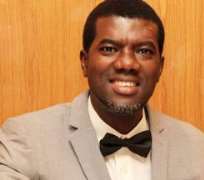 The Buhari government released a list of 17 of its greatest achievements a few hours ago and after reading it, I was embarrassed for the regime. The Buhari administration counts exiting a recession that it put Nigeria into as its greatest achievement of 2017! This government is the definition of cluelessness! We exited recession by growing at 0.5% meanwhile our population grew by 2.6%. Do the math and pray that 2019 is the end of this nightmare!

And going further they go on to list stabilizing the Naira as one of their achievements! A Naira they met at ₦199 to $1 and which is presently ₦365 to $1 has not been 'stabilized', it has been murdered. The Naira is in such bad shape that $1 can give you a Naira for every day of the year.

And how can this propagandist regime list bumper harvest as achievements when the latest Global Hunger Index published by the US based International Food Policy Research Institute, indicates that hunger has increased in Nigeria?

In other words, the Nigerian Customs Service generated less than half of what it generated in 2014 and this fact cannot be hidden with their infantile propaganda. You go through these 17 so called achievements and you soon realize that there is nothing tangible, like a road built or a refinery started. All their farcical 'achievements' are non tangibles.

Finally, let me add that Nigeria is broke. The Buhari administration has borrowed more than any government before it. Our total debt stands today at slightly over $64 billion. Foreign and domestic lenders are now wary of lending to the Nigeria government.

The landing cost for petrol is ₦171.40 per litre. Buhari has been secretly paying a subsidy of ₦26.40 per liter because he was ashamed of being exposed as a hypocrite for telling Nigerians that subsidy does not exist and Jonathan was deceiving the nation. Now he can no longer afford the deception.

Don't be a fool. Prepare for fuel price increase. IT WILL HAPPEN! That is one achievement I can credit the Buhari administration with.

Reno Omokri
Number One Bestselling author of Facts Versus Fiction: The True Story of the Jonathan Years: Chibok, 2015 and Other Conspiracies