Man caught in sex romp his 'sister' during wife's funeral 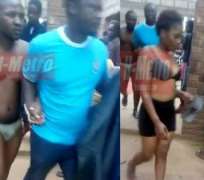 A widower left his relations and in-laws in shock when he was caught having sex with a woman during his wife's funeral.

The accused, Luscious Chiturumani, reportedly lived in Gweru, a suburb of  Zimbabwe with his wife, Sibongile Mthetwa, who allegedly died after a brief illness.

As reported by HM Metro, Chiturumani did not complete the traditional marriage obligations on his wife, as he still owed the bride price. It was therefore mandated that the deceased be buried in Chiredzi, her parents' village.

Quoting an eyewitness, HM Metro reports, “The widower was accompanied to the in-laws' place by a woman whom he introduced to them as his sister.

“In line with tradition, they were checked into the guest room, which they were also expected to share with other visitors.

“However, no guest joined them in the room, and the widower and the woman took advantage of the situation and woke up to some early morning sex.

“At dawn, someone smoking outside the house leaned on the window during which he heard some funny sounds coming from the guest room.

“The unidentified man then decided to call others to come and see what he suspected.

“The doors had no locks and the two were engaged in sex as family members crashed in.

“A close relative of the deceased identified as Grace Mtethwa confirmed the incident, saying that Chiturumani had brought disgrace to their family.

“'It is very much disgusting what my uncle has done,' said a relation of the widower, Humbwa Chaiwo.

“'He has proved to be a dog and lacking any sense of morality. How can someone come all the way from Gweru to have sex here? I have never seen anything like such in my entire life.’”

The online medium reports that the two were attacked by a mob which viewed their action as a disrespect for his dead wife and his in-laws.

“The two were forcefully marched out of the room and Chiturumani was slapped repeatedly and kicked around as he made the short walk to a car that was waiting to convey him away from the scene of the incident,” HM Metro reports.