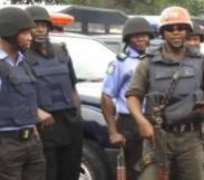 The police command in Katsina State on Wednesday said it foiled an armed robbery gang that specialised in car theft and arrested two persons.

The Commissioner of Police (CP) Mr Benson Gwana, disclosed this when he presented

the suspects before newsmen in Katsina.
He said “those arrested were Hussaini Ahmed and Mohammed Kabir, both of Tudun-wada area of Katsina.

“The duo were apprehended after they had used master key to steal black Honda car with registration No. ABC 351EF and Chassis No. 1HGCS 164A803628.”

He added that the police had also arrested two armed robbers who specialise in motorcycle theft in Katsina metropolis.

“The suspects are Rabe Hamza and Rabo Mayau, both of Nasarawa Bugaje ward in Katsina Metropolis.

“The suspects were arrested following a tip-off.”
Gwana explained that the suspects strangulate their victims with rope on the neck

before seizing the motorcycle.
The commissioner disclosed that nemesis caught up with them as they were arrested at the GRA roundabout trying to snatch a motorcycle.