NSCDC Has Zero Tolerance For Corruption 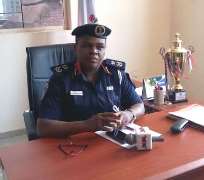 Delta State Commandant, Nigeria Security and Civil Defence Corps (NSCDC), Commandant Sam Ego Ezeagbogho, has noted that the Corps does not accept corruption as stipulated in the civil service rules.

The newly posted NSCDC boss also said the Corps in collaboration with other sister agencies is equipped to tackle oil theft in the region, “because we are already trained, we have what it takes to face these set of people and the other agencies on ground are fully ready to join hands with us and continue the war against criminality”.

Commandant Ezeagbogho gave the hint Thursday in an interactive session with journalists in Asaba.

She noted that security would not be achieved by on person or organization, hence she paid courtesy visits to sister agencies in a bid for synergy geared towards achieving a robust and effective collaboration.

On the allegation on some personnel collaborating with oil bunkers, she said, “we are always against those who are not in line with what the law says. And I want to also let you know that they don’t sleep, they look for ways to dent the images of those fighting them”, revealing that oil thieves uses that as a tool to weaken personnel to carry out their nefarious act.

According to her, the rules are also clear on any officer caught conniving with criminals to rob the country of its resources even as she hinted that no officer would be spared if found culpable.

She said the civil service rules, guide officers’ conduct in the field just as Commandant Ezeagbogho noted that those deployed to government and public offices are well remunerated by the federal government to, “encourage them do the job and anyone caught in any evil act will be dealt with in line with the law”.