Why Adriana Lima, Emily Ratajkowski can both be feminists, no matter how much skin they show 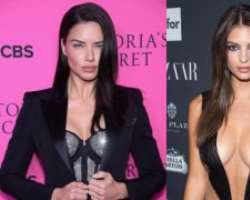 When a model whose career is built on being the face of a lingerie behemoth says she'll no longer strip down just for the sake of it, it's worth taking note. This was the case recently when Victoria's Secret veteran  Adriana Lima took to Instagram with her declaration.

“I realized that a majority of women probably wake up every morning trying to fit in a stereotype that society imposed. I thought, that's not a way of living and beyond that, that's not physically and mentally healthy. So, I decided to make that change. I will not take of my clothes anymore for an empty cause,” the model wrote on Instagram on Dec. 9. Over the weekend, in an apparent response to the reactions, she posted , “Not everyone deserves to know the real you. Let them criticize you they think you are.”

(It's worth noting that another Victoria's Secret angel of years past, Heidi Klum , made similar comments when she warned young models in 2013 that they shouldn't get nude during photoshoots simply because photographers ask them to.)

Lima insisted through representatives that the claim was not made in response to the recently aired Victoria's Secret Fashion Show, which was Lima's 18th appearance on the broadcast, and some, like Fashionista , speculated that Lima might instead have been reacting to the Love magazine Advent digital video calendar, in which models and celebrities are filmed in their lingerie doing everything from ballet exercises to rolling around in a heap of spaghetti. (Cue Emily Ratajkowski , who did just that.)

Ratajkowski, whose career was catapulted after her debut in the racy “Blurred Lines” music video, has repeatedly defended what some call hypersexualized posts that detractors say undermine her feminism. In response to Ratajkowski's appearance in this year's Love Magazine Advent calendar shoot, for example, Piers Morgan, the British media personality who frequently criticizes Ratajkowski, said, “Do you really think [British suffragette] Emmeline Pankhurst fought for Emily Ratajkowski's right to writhe semi-naked in spaghetti, post it to millions on social media & then feign indignant outrage at being 'sexually objectified'?”

So which is it: Is a woman better off reclaiming her sexuality by covering up? Or by getting naked? Is the secret to being a truly empowered feminist lie in rejecting misogyny and objectification via Instagram “likes”? And what is an “empty cause” for nudity versus a worthy one, anyway? Even the New York Times wondered: Is there room for pinups in a post-Weinstein world ?

The politics of female sexuality today are just the latest extension of the feminist sex wars of the 1970s, in which women debated whether or not you could be a true feminist and also support pornography and erotica. One might say the contemporary debate extends to things like the Victoria's Secret Fashion Show and the Love Magazine Advent calendar.

But to bifurcate the debate in that way is unproductive, and doesn't address the root of the issue. When the Hollywood Reporter asked designer Prabal Gurung whether the red carpet was becoming less sexy in light of the #MeToo movement, he responded, “Women can dress however they want to, show their body or cover it; as a designer, my job is to provide options. Being sexy or not is an individual choice — the problem is the gaze.”Ah, the good ol' male gaze . Tara Well, who has written about how women can reclaim the male gaze as their own, agrees, but says that your own intentions matter.

For example, are you posting for outside validation? Or because it's your job, and you're making money? “For women, they have a certain social capital of being sexy and beautiful and that's a commodity recognized in our culture. So to blame women for using that as leverage to do what they want in their life and make a good living and develop a following for causes that are important to them, I don't think you can blame women for that,” Wells adds.

That would certainly bolster Ratajkowski's defense; she told the Love Magazine about her shoot, “I'm tired of having to consider how I might be perceived by men if I wear the short skirt or post a sexy Instagram. I want to do what I want to do. Feminism isn't about adjusting; it's about freedom and choice.”

But not all researchers agree. “The real crux of the issue” is not any one person's posts or photos, rather the media system overall which values women primarily as sexual beings, says Elizabeth Daniels, a professor at the University of Colorado who has studied the impact that media representations of women have on girls.

“We are seeing a shift with the body positivity movement where it's becoming more prevalent for celebrities and individuals to speak out about the oppression of the thin ideal and artificially created bodies we see in our media system, but it's not going far enough,” Daniels says. “We need to address the underlying gender stereotype that women should be valued for more than their bodies.”

Daniels also says that no matter what one's intentions may be — in this case, with the Victoria's Secret Fashion Show, which producers say is to empower women while critics say it is to push product through sex — the consequences do more harm than good to the broadcast's youngest viewers.

In her own research, Daniels found that showing school-age girls images of elite female athletes drew from adolescent girls and young adult women more positive feelings about their bodies than sexy pictures of models, which tended to produce negative feelings.

A gray area, then, might be this year's Love Magazine Advent video calendar, for which Ratajkowski performed. The theme was women's strength:  Ashley Graham pushed a weighted sled down the street, Bella Hadid swung a sledge hammer at a tire, Kendall Jenner shadowboxed, and Winnie Harlow stretched. But they all wore lingerie.

“That issue when we talk about whether something is empowering or not is that we're talking about it with adults. That's fine, but it's a mistake not to mention that girls are affected by what happens in media environment, and since they don't have the cognitive skills adults have to analyze media and see that advertisements are selling products, they're left disillusioned,” Daniels says. “And w hen brands create dissatisfaction [with one's self], more products get sold.