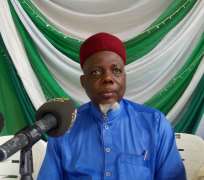 The Osun State Muslim Community has demanded an apology from the Nigeria’s Council of Legal Education over the treatment meted out to a female law school graduate, Firdaus Amasa Abdussalam who was prevented from being called to the bar because of her hijab.

The Acting President of the body, Alhaji Mustafa Olawuyi while briefing journalists after an emergency meeting of the OSMC at its Secretariat in Osogbo said the manner Firdaus was treated by the Body of Benchers during the call to bar at the International Conference Centre was a huge embarrassment to the generality of Muslims in the country.

Olawuyi said Firdaus did not breach any law by refusing to take off her hijab and challenged the Council of Legal Education to point out the section of the law of the land that was contravened by the innocent Muslim sister.

According to Olawuyi “Having satisfied necessary requirements to practice law in Nigeria by attending a university and the law school, it is traumatic that Firdaus Amasa Abdussalam was denied the call to bar just because she is an obedient Muslim lady covering her head with hijab as directed by the Almighty Allah.”

“Just imagine, Firdaus Amasa Abdussalam was already wearing her neat gown and the wig on top of her short hijab, ready for the ceremony but she was not allowed to enter the International Conference Centre only because she fulfilled an obligation that is part of her religion.”

“We consider the action of the Nigerian Law School as a violation of the right of this lady to freedom of religion as enshrined in the Section 38 of the 1999 Constitution of the Federal Republic of Nigeria.”

“We therefore demand apology from the Nigerian Law School over this needless embarrassment to Firdaus Amasa Abdussalam and all Muslims in Nigeria and worldwide.”

The OSMC also demanded that Firdaus Amasa Abdussalam must be called to the bar in the next ceremony. Olawuyi warned that “whoever that attempts to hinder the lady from being called to the bar subsequently would incur the wrath of Allah here in this world and in the hereafter."

"Muslims in Nigeria will not keep our hands akimbo as long as injustice and persecution of Islam and Muslims remain unchecked", he said.

The OSMC lauded the President of Nigerian Bar Association A.B. Mahmoud for his prompt reaction on the matter which has been trending on the social media with the hashtag #JusticeforFirdaus being used.

The NBA President who posted the photo of his daughter, Zubaida wearing hijab when she was called to the New York bar had described the controversy as needless and promised that the association would look into the matter.