Atiku Abubakar in the ring again 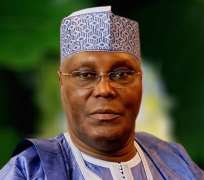 There is nothing wrong with Atiku Abubakar leading this nation by 2019 except his age. Sincerely, my only reservation for his candidacy is this age factor as Nigerians can't afford another medical tourism. However, despite his leadership qualities, national acceptance and socioeconomic savvy, Atiku will need to scale some cogent hurdles.

Foremost, he must reconcile with his erstwhile boss, the EBORA OWU as any attempt to belittle this factor will undermine his ambition. Obasanjo knows capability of Atiku to lead Nigeria from all fronts than any other person but only bearing grudges of how the latter terminated his third term ambition. Anything from this singular war is hoax.

Another hurdle for Atiku is how to pick a running mate from a geopolitical zone that will not jeopardize his chances in other zones. Currently, an Igbo man should be made as Vice President come 2019 so as to assuage the agitation in the zone. However, how this will not affect chances of winning Lagos should be treated with cautions.

If Atiku needs Southwest bloc, he must do everything possible to bring Jagaban of Borgu to his camp. Asiwaju Ahmed Tinubu's political influence in Southwest cannot be underrated, though he cannot join him in PDP but he can do him favour like he did in 2011 for Jonathan. A pointer to this is how Atiku's arch rival in the race has started worshipping Jagaban. Atiku should also do well to cede SGF to Southwest.

Another hurdle to scale is the media, currently the media outfits have been bought over and pocketed by Buhari led government. They are only feeding the public what Aso rock occupants want for the innocent public. Atiku must take over the media outfits on all platforms to air his views unless he wants to be caged.

Lastly, Atiku should go back to his base in the north to convince the northern illiterates who are bent to follow Buhari likes corpse's flies. He needs a radio platform like BBC Hausa where the Almijiris and others diehard supporters of Buhari can be informed rightly.

Dear Atiku, your age is still a factor.