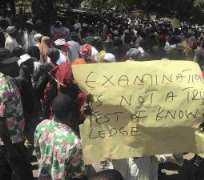 The Kaduna Division of the National Industrial Court on Thursday stopped the planned sack of 21,780 primary school teachers who failed a competency test organised by the state government.

Daily Trust recalls that the lawyer representing the teachers, Samuel Atum, had on October 30 filed a motion of “interlocutory injunction”, asking the court to restrain the government from dismissing or disengaging any teacher on the basis of the test conducted in June 2017.

The case was earlier adjourned to February 6th, 2018 for hearing.

However, at the hearing today which was attended by hundreds of teachers and labour leaders, the lawyer, Mr. Atum, praised the court for “graciously” giving the order.

He said, “This is democracy and the premise of democracy is the rule of law, so we expect nothing more than absolute submission by the state government to comply with the order of the court. I have confidence that the government will comply or obey this order.”

Lawyers representing the state's Attorney General and the State Government, as well as Teachers Registration Council of Nigeria (TRCN) declined comments when approached by journalists.

Some teachers who spoke to our correspondent said the ruling was encouraging. “It has given us hope. We hope too that the governor will obey the court order,” Zainab Sanusi, a teacher, said.

It will be recalled that the planned sack of over 20, 000 teachers sparked controversy, condemnation and protests.

Some of the scripts released by the government showed that many of the teachers supplied ridiculous answers to basic questions while about two-thirds of the teachers failed to score up to 75 percent in the grading.

The Kaduna government has since vowed to sack the affected workers, despite threats by the local chapter of the Nigerian Union of Teachers (NUT), to embark on indefinite strike.

The government also said it would recruit 25,000 qualified teachers in their stead.