By Movement for the Survival of the Ogoni People (MOSOP) 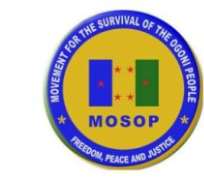 The attention of the Movement for the Survival of the Ogoni People (MOSOP) has been drawn to a publication titled " RE: AN ULTIMATUM FOR THE REVOCATION OF ALL APPROVALS GRANTED ONE ROBOMICHAEL LIMITED RELATING TO THE OPERATION/DEVELOPMENT OF OML 11 (THE OGONI FIELDS)" and dated December 10 2017. The said publication is claimed to have been signed by the Media/Public Affairs Advisor to MOSOP, Mr Bari-ara Kpalap.

MOSOP wishes to inform the general public that there is nothing called the Media/Public Affairs Advisor to MOSOP and categorically declare that the aforementioned publication did not emanate from the Office of the President of MOSOP nor did it receive his consent.

MOSOP is absolutely unaware of the statement and will therefore urge the general public to discountenance it.

MOSOP uses this opportunity to call on the general public to

henceforth disregard all communications which does not emanate from the President of MOSOP, Chief Comr. Legborsi Saro Pyagbara in respect of the position of MOSOP on the Ogoni Oil or Oil exploration/exploitation activities in Ogoniland.