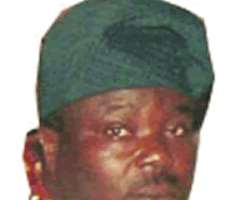 Deji
All appears set for the removal of the embattled Deji of Akure, Oba Oluwadare Adepoju Adesina as the state government has given him a four day ultimatum to explain his role in the alleged street brawl with his estranged wife, Bolanle.

The state government in a statement issued by the commissioner-in-charge of Local government and Chieftaincy Matters, Hon Niran Sule-Akinsuyi, directed the Akure monarch to  forward his explanation to government latest 10. am on Wednesday or face the consequence.

The statement read in part, 'In view of the foregoing, government hereby requests for your written explanation to the allegations leveled against your person. Your representations, if any, should be forwarded to government through the commissioner in charge of local government and chieftaincy affairs not latter than 10.am on Wednesday, 9th June, 2010'

Already, the letter from the state government to Oba Oluwadare Adesina is making him jittery over the matter.The monarch who did not show any remorse towards his unruly conduct in public before now, Sunday Sun authoritatively gathered has started sending emissaries to the state Governor, Dr. Olusegun Mimiko.

It was learnt that the monarch became jittery when the state governor refused to pick his calls.

It was at this point, the embattled monarch discovered that his days were numbered as the paramount ruler of Akure Kingdom.

The Monarch, it was also gathered has started sending emissaries to notable Akure indigenes both at home and in Diaspora to prevail on Mimiko not to dethrone him. Oba Adesina was said to have  made several calls on Friday  to first class traditional rulers in the state to reverse their  suspension order and beg on his behalf. However, most of his colleagues, sources told Sunday  Sun were avoiding the embattled monarch like a plague.

The traditional Kingmakers made up of prominent Chiefs in Akure Kingdom have also gone into hiding for fear of being attacked by the monarch. The traditional chiefs  headed by the Lisa of Akure had insisted that the monarch must be removed and banished from Akure domain. The speculation may have been corroborated by the failure to reach them through their cell phones which were switched off.

Sunday Sun also gathered that the police authorities in the state are waiting for directives from the Inspector General, Ogbona Onovo to effect the arrest and prosecution of the monarch.

The police source hinted that once an order is given from the Police boss, efforts would be geared towards arresting Oba Adesina. The commissioner in charge of Local Government and Chieftaincy Affairs, Niran Sule-Akinsuyi, said the state government was inundated with several reports and complaints with respect to Oba Adesina's alleged misconduct as the monarch of Akure .

He said, 'The foregoing allegations were widely reported in various Nigerian newspapers. The prominence given to the stories was very grave and it undermines public peace and right of others'. Meanwhile, the state commissioner of Police, Ballah Magaji Nasarawa has beefed up security around the Federal Medical Centre Owo, where the estranged monarch's wife is presently receiving treatment.

The Commissioner, who paid a visit to Olori Bolanle, assured that the command would do everything to make sure that she is shielded from attack.

The Commissioner's assurance came on the heels of the allegation raised by Olori Bolanle that some people were trying to attack her at the hospital. Mr. Nasarawa however told journalists that the monarch's wife was currently responding to treatment and that her skin has stopped peeling.