POVERTY as a Killer of Democracy 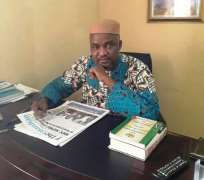 Professor John Keane contributed to scholarship by writing a book he stylishly titled: "The Life and Death of Democracy".

In one of the chapters he delved extensively into the deep reverence the Athenians gave to their deities and copiously reported about the public execution of one of the World's greatest Philosophers Mr. Socrates for allegedly corrupting the youth apparently because of his effort towards radically transforming the Youth to their better selves.

The Professor wrote thus: “Citizens invested great hopes in deities. They also feared them. The public trial and execution of Socrates in 399 BCE for importing fake gods into the city, and for impiously corrupting its youth, confirmed to many that individuals who snubbed the deities would suffer harsh punishment."

"The priests and old men of the city loved to reinforce the same moral. They had a habit of reminding citizens who mingled in the agora (the story was taken originally from Homer) that at the entrance of the home of Zeus, the god of freedom, stood two large barrels, from which he dispensed ill to some newcomers, good to others, and to the rest a few ladles of good from one barrel and, from the other, a bit of ill".

He continued thus: “Tales like that put the whole city on edge. We may scoff at these deep feelings for the sacred. But, again, the reality was that many citizens of Athens thought of themselves as members of a community of worshippers who believed that deities like Zeus would punish them collectively if they or their leaders behaved unjustly".

"Zeus and other deities were thought to enjoy the power to ruin democracy, for instance by bringing bad weather or failed harvests, or the death of oak trees, or the disappearance of fish from the nets of fishermen operating from the nearby port of Piraeus.”

The above narratives of how important deities are to the Athenians is exactly how good governance is to democracy even as widespread poverty amongst the citizenry is the killer of democracy.

In Nigeria of our time, particularly since the advent of the current administration under President Muhammadu Buhari, the thematic issue of poverty, unemployment and insecurity are major indices that characterize the situations of millions of Nigerians. In the last two years, all the essential services in the health; education; Roads; Electricity power and Agriculture have virtually collapsed.

For over two years under the current administration, most Nigerian homes were bombarded by the negative impacts of economic recession and the expanding frontiers of poverty. Poverty is brought about by the absence of good governance. The sacred fact is that the skyrocketing asking prices of essential commodities have dangerously impacted on the living conditions of millions of Nigerians. Currently, the pump prices of premium motor spirit and other essential products such as diessel and kerosene have gone far beyond the affordability of millions of Nigerians thus multiplying the rate of poverty in Nigeria.

According to the latest poverty report by the National Bureau of Statistics, NBS, about 112 million Nigerians (representing 67.1 per cent) of the country’s total population of 167million.

On 18th of October, 2016, the world marked International Day for Eradication of Poverty, International Labour Organization, ILO, did raised the alarm that number of poor people in the world has hit the one billion mark.

In a statement to mark the occasion, ILO Director-General, Guy Ryder, said though Work should be the best route out of poverty, but 327 million working men and women live in extreme poverty and 967 million in moderate and near poverty.

Poverty is really a big challenge in Nigeria because there can be no hiding the fact that a hungry man is an angry man.

The majority of the masses and the youth, statistics have shown, are poor. Poverty is the cause of many of our problems. It has led many Nigerians to attach no value and regard to life itself. This sociological fact means that poverty is at the root of most social crimes in the Country. The rate of violent crimes of armed robberies, kidnappings, car jackings, murder and such social crimes of sexual violence have increased as the rates of poverty widens. The nexus between mass poverty and increased violent crimes are too close. Poverty seems to have started walking on four legs in our current period. As far back as the administration of President Olusegun Obasanjo poverty was seen as a strategic social menace.

According to the former Senior Special Adviser (SSA) to a former President on Poverty Alleviation, Dr. Magnus Kpakol, in a paper titled, “NAPEP Programmes as Enabler for Rapid Economic Development in the South-South Region”, presented at the South-South Economic Summit in Calabar, the Cross River State Capital, 74 million Nigerians are poor. The figure, which was so as at December 2008, dropped by one million from 75 million in 2007. He said the population of the nation’s poor people was 80 million in 1999, i.e., when Nigeria returned to democracy.

According to him, the poverty rate was higher in the northern part of the country. His analysis showed the following percentage of the poor in all the six geopolitical zones of the country.

This figure which was contained in the 2010 poverty profile report of the agency represented 69 per cent of the country’s total population.

From our investigation we found out that apprehensions hovered that the figure might increase to 71.5 per cent in 2011 as the 2010 figure showed data collected from 20 million households having an average of between four to six family members.

The Punch of February 14, 2012 reported the National Bureau of Statistics to have said that 112.519 million Nigerians live in relative poverty conditions.

In 2013, the official poverty rate was 14.5 percent, down from 15.0 percent in 2012. This was the first decrease in the poverty rate since 2006. In 2013, there were 45.3 million people in poverty.(Sep 16, 2014).Overall, 2013 should have provided a favourable context for the realization of key reforms and investments (power, roads, business climate, education, health, agriculture) that could generate the non-oil growth, productivity increases, and jobs needed to ensure the country’s prosperous future”.

The Jonathan administration has increasingly made reference to Nigeria’s GDP and economic growth as signs of successes while the opposition and several Nigerians lament that those growth have not had a corresponding effect on the lives of average Nigerians.

In 2014, Nigeria had one of the world's highest economic growth rates, averaging 7.4% according to the Nigeria economic report released by the World Bank. Poverty still remains significant at 33.1% in Africa's biggest economy.

In 2015, the GDP and other developing indexes of countries, was said to have maintained a constant decline in the past five years in most countries under reference, with Nigeria recording its worst, jumping from 60 per cent .

In 2016, the level of poverty (productivity index) in Nigeria has maintained a constant rise, reaching its all-time high of 72 percent by August 2016.

In 2017, at least 86million still live in abject poverty,

Page’s analysis is backed up by a new global index produced by Oxfam and Development Finance International, which puts Nigeria outright last in a list of 152 countries ranked by their “commitment to reducing inequality”.

Nigeria’s social spending (on health, education and social protection) is, according to the report, “shamefully low” and “reflected in very poor social outcomes for its citizens.

Poverty is brought about by lack of good governance. There is no gainsaying the fact that at both the national and state levels the total absence of good governance and the high rate of corruption have led to the heightened state of mass poverty.

Professors D.A. Guobadia and Epiphany Azinge wrote in the book: "Globalisation, National Development and the Law" that; “Good governance can be identified more than defined. It can simply be defined as governance according to agreed rules and regulations that satisfy the developmental needs and aspirations of the members of a given society."

"Good governance emanates from a legitimate government that does not act arbitrarily and achieves the common goals of a nation.”

The World Bank sees good governance as “the manner in which power is exercised in the management of a country’s economic and social resources for development.

The United Nations Development Programmed (UNDP) on the other hand, sees good governance as “the use of political, economic and administrative powers at all levels of government to deal appropriately with the problems facing a country.

The main ingredients of good governance according to the UNDP are: citizen participation in governance, the rule of law, transparency and equality.”

“It is increasingly recognized that integrity and good governance are essential building blocks for meeting objectives of sustainable development, prosperity and peace."

"No two countries are precisely alike in this respect. Nevertheless, in all countries whatever their cultural differences, good governance and integrity require the rule of law, effective state institutions, transparency and accountability in the management of public affairs, respect for human rights and the meaningful participation of all citizens in the political processes and decisions affecting their lives, says Kofi Anan.

Like the two editors of that great book aforementioned, I therefore agree with Justice Zanna that “good governance is the state of operation of the institutions and instrumentalities in a country, as enabled and enjoined by the traditions and laws, in the exercise of authority for the effective and efficient attainment of a high quality of life for the people".

There is the urgency of the now for the entire citizens to demand good governance from those who we have elected and should any of these layers of public office holders fail to discharge the demands of good governance, we owe it a constitutional responsibility to call for their exit from public office.