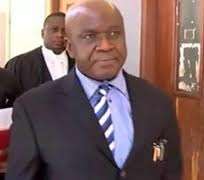 The Court of Appeal, Lagos on Monday struck out the criminal charge filed by the Economic and Financial Crimes Commission against a serving judge of the Federal High Court, Justice Hyeladzira Nganjiwa.

The EFCC had arraigned the judge for allegedly receiving 260,000 dollars and N8.7 million gratification to enrich himself as a public official.

The anti-graft agency arraigned the judge on 14 counts before the Lagos State High Court in Igbosere on June 23.

The judge pleaded not guilty and trial had already commenced before Justice Adedayo Akintoye.

However, in a judgment on Monday, the appellate court presided over by Justice Adejumo Obaseki quashed the 14 count charge against Nginjiwa.

Prior to Justice Nganjiwa's arraignment on June 23, Clarke had argued a preliminary objection challenging Justice Akintoye's jurisdiction to hear the case.

The SAN had contended that by virtue of Section 158 of the 1999 Constitution, only the National Judicial Council had power to deal with the kind of allegations brought by the EFCC against the judge.

But the prosecuting counsel for the EFCC, Mr Rotimi Oyedepo, disagreed and rather maintained that Nganjiwa did not have immunity against criminal prosecution.

The court of appeal in its verdict on Monday, upheld the appellant's contentions and struck out the charge. (NAN)