Gov. Wike gives out 16 Sports Utility Vehicles, SUVs to representatives of the State in the National Assembly 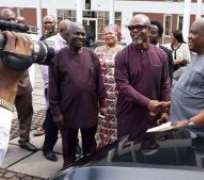 Rivers state Governor, Nyesom Wike,  has given out 16 Sports Utility Vehicles to representatives of the State in the National Assembly.

The governor said the gift was meant to aid their legislative functions.

National Assembly members elected on the platform of the All Progressives Congress, APC including Senator Magnus Abe and Senator Andrew Uchendu are also beneficiaries of the 2018 Lexus Jeep.

According to reports,  Senator Uchendu has denied that he was given one of the SUVs by Governor Wike, but Senator Magnus Abe has not offered any comment.

A statement from Government House, Port Harcourt says, the vehicles were acquired to aid the Federal lawmakers in the discharge of their official functions.”

Handing over the vehicles, Governor Wike said, “the vehicles are for all members of the National Assembly irrespective of their party affiliation.

“Defend the interest of the state wherever you are. This is from the Government of Rivers State which you are part of.

“This is to aid you to carry out your official functions in Abuja”.