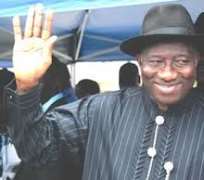 Jonathan said he hopes the party will become solid after its December 9 national convention.

Jonathan spoke in an interview with newsmen after his visit to Gov Nyesom Wike of Rivers, in Port Harcourt.

He said, “God willing we will go through the convention and the party will become solid.

“Now we have the National Caretaker Committee and when you are caretaker you are not as strong as elected chairman.

“You know the party just went through challenges, luckily we passed the challenges through the pronouncement of the Supreme Court.

“Now we want to formerly elect the national officials of the party that will lead us to 2019 elections.”

Jonathan said he was not in Port Harcourt for any meeting but to appreciate the support Wike gave him during the burial of his brother- in-law.

“He assisted us and he came physically with his deputy and some principal officers of the state.”

Asked of his assessment of the two-and-a-half years of Wike administration, Jonathan described him as one of the best governors.

“He is one of the best governors in terms of commitment and putting structures in ground.

“I have always say that for you to say you are doing well as a governor you must add value to whatever you met .

“He met certain structures and he improved on them. He has contributed roads and other infrastructure.

“He even invited me to commission one of roads and bridges during the state anniversary. That is why people call him Mr Project.”

Jonathan commended the good work of the media, their objectivity reportage and sensitisation of the public.

“You have been playing your role especially as politics is involving and as we are going to different level”.

Meanwhile, Wike says the Peoples Democratic Party (PDP) leadership will not accept anything likely to disrupt its Saturday's National Convention.

Wike gave the assurance when he received a national chairmanship aspirant of the party, Chief Raymond Dokpesi, at Government House, Port Harcourt, on Sunday.

Wike said that whatever anybody might be saying, the convention would be fair and hitch-free.

The governor pledged to support the party to provide a level playing ground at the convention.

“If you believe and love this party, there is nothing you cannot do, everybody can make sacrifice for this party except you don't believe in this party.

“What I am saying is that whoever emerges we should come out as members of the same party to support him.”

Wike also condemned a statement credited to a former state governor in which stakeholders of PDP in the north micro zoned the party chairmanship position to the South West.

He described the statement as a slap on the South South, saying it was wrong for anybody not from the region to do micro-zoning against the decision of the party.

“The chairmanship was zoned to the south and presidency to the north. You cannot in your own place micro zone our own position.

“We cannot seat here and micro zone the presidency. It is not possible. It is what they tell us to do that we will do.

“PDP is not in power, it is in opposition. We need a Chairman that will drive the party to make PDP to win election,” Wike said