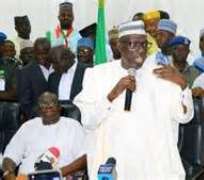 PDP Chairmen in the 19 northern states and the FCT on Friday rejected suggestions that the National Chairmanship seat be sub-zoned to a particular zone in the South.

The chairmen, who announced their stance after a meeting in Abuja, however, reaffirmed commitment to the zoning of two principal positions as agreed at the party's National Convention in Port Harcourt last year.

Mr Hassan Hyat, Chairman, Forum of PDP State Chairmen in the North, who addressed the press after the meeting, said that the forum “rejected any move to sub-zone the seat to any particular zone”.

“The position cannot be sub-zoned to a particular zone in the south because that will disenfranchise other contestants. We, as state chairmen, cannot be party to any micro-zoning.

“The party's decision at the Port Harcourt Convention is final and binding on all. No one has the right to change or tamper with it,” Hyat declared.

The News Agency of Nigeria (NAN) reports that the party had zoned the office of the National Chairman to the South, and its ticket in the 2019 Presidential elections to the North.

Some interest groups have, however, suggested that the National Chairmanship seat be sub-zoned to the South-West, and premised their stance on the argument that the zone had never occupied the position.

A group of northern PDP elders recently re-echoed that stance and urged delegates from the north to vote for candidates from the South-West for the party's top position at the PDP National Convention slated for Dec. 9.

But the Northern States Chairmen Forum, after deliberating on the development, resolved to reject such micro-zoning as proposed by such elders.

“The party's decision is that all parts of the south should be given the opportunity to present their candidates so that delegates can choose the best material for the position of National Chairman.

“We stand by that position and and have resolved to reject any sub-zoning to a particular area,” the Forum declared.

The Forum further declared that zoning was a cardinal principle of the PDP and should “never be toyed with”.

“As the national convention gets closer, our stance on the zoning arrangement remains unshakeable. We believe that our party will only get stronger if we remain committed to it,” he said.

The forum urged delegates to assess candidates critically and vote on merit, and advised the contestants to be “temperate and civil” in the use of language.

It urged members seeking positions to “understand that power comes from God” and be prepared to accept whoever God ordained to lead the PDP.

The group commended the National Caretaker Committee of the PDP for strengthening the party after its protracted crises, and expressed happiness that the PDP was growing stronger “every minute”.

It particularly expressed satisfaction with the attention the party was gaining nationwide, saying that recent defections to the fold was a testimony to its rising popularity.

On the recent return of former Vice President, Atiku Abubakar, to the PDP, Hyat said that it was a “beautiful development”.

“Atiku is back and we are all happy to have him on board once again. We are going to receive even more defectors in the next few days. It only shows that our party is waxing stronger,” he said.

Hyat, however, rejected suggestions that the returnees would divide the PDP.

“The new comers will not divide the party. They will make us stronger. We need them to build a strong force to wrestle power from the APC,” he said.

NAN reports that the meeting was attended by 16 chairmen, while four sent representatives.