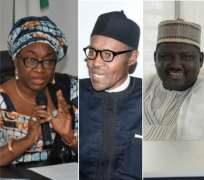 Worried by the global opprobrium brought to Nigeria by the current faceoff between the Department of State services (DSS) and the National Intelligence Agency (NIA) with the Economic and Financial Crimes Commission (EFCC) over the latter's unsuccessful attempt to arrest erstwhile Directors General of DSS and NIA Ekpeyong Ita and Mr Ayo Oke for alleged corrupt practices, President Muhammadu Buhari has been asked once more to rejig the machinery and mechanisms of the anti-graft crusade. "Mr President must fix the heavily broken and compromised system if his much touted anti-corruption mantra won't be dismissed as a gambit and a political ruse and therefore cosmetic by historians and critical minded thinkers".

In a statement against the backdrop of the widely reported public spat by the three sister security agencies and also the indictment of the hierarchy of the Economic and Financial Crimes Commission (EFCC) of mismanagement of forfeited assets from the alleged pension theft kingpin Abdulrasheed Maina as made by the Federal Attorney General and Minister of Justice Alhaji Abubakar Malami, HURIWA believes that the anti- corruption campaign of this federal administration under President Muhammadu Buhari has comprehensively derailed and broken down demanding immediate but far reaching reforms and transformation.

HURIWA said part of the tinkering process should include the overhauling of the hierarchies of Department of State services (DSS); the Economic and Financial Crimes Commission (EFCC) and the office of the Federal Attorney General and Minister of Justice and the appointments of persons who are neither politically compromised or ethically questionable. Endorsed jointly by the National Coordinator Comrade Emmanuel Onwubiko and the National Media Affairs Director Miss Zainab Yusuf, HURIWA stated that the reported battle for supremacy which stems from inter-agencies' rivalries does not augur well for the global image of Nigeria and indeed threatens the national security of Nigeria.

HURIWA said the President owes Nigerians the constitutional mandate of doing only those things which serves the overall public good and not follow his whims and caprices or try to satisfy the demands of the so-called Presidential cabal who are reportedly calling the shots from behind and pulling the Presidential strings which in many instances have violated the Constitutional oath of office administered on President Muhammadu Buhari obliging him to put his private interest far away and not allow conflicts of interests to occur and compromised his official obligations.

HURIWA said the President was wrong not to have dropped the acting Chairman of EFCC Ibrahim Magu who was twice rejected and refused confirmation by the Senate for his indictments in an extensively damaging memorandum sent to the Clerk of the National Assembly by the Director General of DSS accusing him of not being a fit and proper person to occupy the office of Substantive Chairman of EFCC. The Rights group said similarly that it was wrong for President Muhammadu Buhari not to have fired the duo of Minister of Justice Alhaji Abubakar Malami and the DG of DSS Alhaji Lawal Daura alongside the minister of Interior Lt.Gen. Abdulrahman Danbazau(Rtd) who were found wanting in the shady circumstances that led to the illegal reabsorbtion/reinstatement of Alhaji Abdulrasheed Maina the alleged/suspected pension thief who until his reinstatement was a fugitive from the laws having been declared wanted over theft of N2billion from Public pension fund.

The Rights group described the indictment of the EFCC's hierarchy by the justice minister over alleged sharing and relooting of 222 forfeited housing assets of the Pension sector as horrendous and must not be swept under the carpets of impunity. HURIWA said the President must be called upon to take immediate action and stop his prevarication over the Mainagate and allied corruption matters especially now that the heads of these strategic security and anti-graft agencies have washed their dirty linens in public and subjected the international image of Nigeria into opprobrium and severe shame. HURIWA recalled that officials of the Department of State Services and the Economic and Financial Crimes Commission were involved in a showdown for over 13 hours last Tuesday when EFCC operatives stormed the home of the immediate past Director General of the DSS, Ekpenyong Ita, to effect his arrest.

HURIWA recalled that Mr. Ita, who served as the head of the DSS from 2010 to 2015, had been invited by the EFCC for his alleged role in the arms scam involving a former National Security Adviser, Col. Sambo Dasuki (retd.), and other service chiefs who have since been arraigned. HURIWA however stated that had the President sacked the heads of these security agencies and appointed credible replacements, this show of shame wouldn't have happened just as the Rights group asked the President to do the needful since it may be impracticable to expect the DG of DSS to cooperate with the acting Chairman of EFCC whom his desk authored far reaching and damaging reports that questions his qualifications and competency to hold such an office just as the Rights group said it was also not practicable for the current holder of the office of Attorney General and Minister of Justice Alhaji Abubakar Malami to trust the Acting Chairman of EFCC who in his thinking is compromised and corrupt just as the acting Chairman of EFCC sees the AGF as corrupt and compromised.