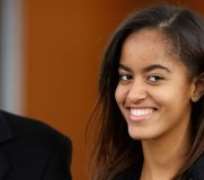 Former first daughter  Malia Obama  spent a good part of her adolescence in the national spotlight as her dad, you know, led the free world for eight years. For the better part of 2017, she's been a private citizen.

But certain media outlets aren't making it easy for her.

After two stories about the 19-year-old's personal life appeared in tabloid and conservative media, voices from both ends of the political spectrum called for giving the young Obama her privacy.

“Malia Obama should be allowed the same privacy as her school aged peers,” Ivanka Trump tweeted on Friday. “She is a young adult and private citizen, and should be OFF limits.”

Ivanka Trump
✔ @IvankaTrump
Malia Obama should be allowed the same privacy as her school aged peers. She is a young adult and private citizen, and should be OFF limits.

Twitter Ads info and privacy
Chelsea Clinton, a persistent advocate for privacy when it comes to kids living in the White House, chimed in shortly afterward.

“Malia Obama's private life, as a young woman, a college student, a private citizen, should not be your clickbait,” she wrote. “Be better.”

Chelsea Clinton
✔ @ChelseaClinton
Malia Obama's private life, as a young woman, a college student, a private citizen, should not be your clickbait. Be better.

Since President Donald Trump's family moved into the White House, Clinton has also been moved to call out  media outlets that focus attention on Barron Trump , who is 11 years old.

Leaked video published by the conservative site The Daily Caller and other outlets appeared to show Malia Obama smoking. Another video, published by TMZ along with still photos, showed her kissing someone during a tailgate party for the annual Harvard-Yale football game.

Tabloids claim to have identified the young man as a student at Harvard, where Obama has just begun her freshman year after taking time off following high school. She has  expressed interest  in pursuing a career in the film industry.

Noticing that Obama's name was trending due to the gossip headlines, people on social media reacted with pointed jokes about the media's choices and sober criticisms ― but mainly jokes. A @_FriscoAng
BREAKING: Malia Obama is behaving like a normal college student.

Twitter Ads info and privacy
Kaivan Shroff @KaivanShroff
Malia Obama is a 19-year-old acting her age at Harvard. She balanced being a kid and being First Daughter extremely well, despite unethical pursuit by the media.

If conservatives are worried about America’s teens, they should stop adult men from dating 14-year-old girls.

Twitter Ads info and privacy
David Dennis Jr.
✔ @DavidDTSS
Saddened to wake up to the news that Malia Obama held secret meetings with Russians and subverted our democracy.

Twitter Ads info and privacy
Astrid Silva
✔ @Astrid_NV
When 19 year old Malia Obama, a college freshman, is under more scrutiny for who she makes out with than old White male elected officials for assaulting women…something broke.