By Association of Nigerian Authors (ANA) 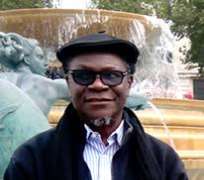 Bode Sowande (born 2 May 1948) is a Nigerian writer and dramatist , known for the theatric aesthetic of his plays about humanism and social change. He comes from a breed of writers in Nigeria that favors a post-traditional social and political landscape where the individual is the creator and maker of his own history not just the subject of norms and tradition. Sowande is a member of the so-called second generation of Nigerian playwrights , who favor a much more political tone in their writing and seek to promote an alliance or acquiescence to a change in the status quo and fate of the common man and farmers who constitute the majority of the Nigerian society. Some members of this group includes: Zulu Sofola , Femi Osofisan and Festus Iyayi .

He runs the Drama group Odu Themes, established in 1972, and Bode Sowande Theatre Academy, an internship programme for dramatists.