By League of Progressives Ambassadors of Nigeria 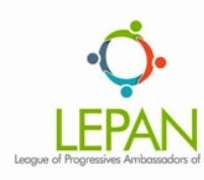 On Saturday 18th November 2017 the Independent National Electoral Commission (INEC) conducted the much-anticipated gubernatorial election in Anambra state in which the incumbent, Chief Willie Obiano of the All Progressive Grand Alliance (APGA) won in all the 21 Local Government Areas of the state.

The League of Progressive Ambassadors of Nigeria (LEPAN), a registered youth-focused, non-partisan civic organisation, has joined other Nigerians to congratulate the winner, Chief Obiano.

In a statement signed by the President of the League, Mr ChukwudiAnyanwuocha in Lagos today the group “wishes to thank Ndi Anambraand all other stakeholders for the peaceful manner with which they conducted themselves during the exercise.”

The group expressed concerns over the low turnout in the election despite its aggressive pre-election campaign for people to turn out to vote. Mr. Anyanwuocha said “As a leading NGO, there is more work to be done in this regard. We need to improve on this in subsequent elections. We will become more aggressive, more strategic, and more focused. If possible we will review our present strategies to ensure we change this dangerous narrative about voter apathy especially among the youths.”

He said “In Idemili North, one of the most populous Local Government Areas in the state, the turnout was as low as 14 percent. That Idemili is the home of some big actors in Anambra politics says a lot. We need to change this narrative by continuous orientation, education, and advocacy.”

The statement further said “The job of getting people to turnout to vote in elections is not just the NGOs, civil society or media that need to take urgent action. The politicians, the government and its agencies like the National Orientation Agency (NOA) as well must also be called to task. We are doing our bit based on the available resources at our disposal, we need to be supported.”

On the performance of INEC, the statement said “While we might give the electoral umpire a pass mark on the overall conduct in the election, we observed that many potential voters in the election were not able to vote due to discrepancies in the INEC voters register and the failure of many card reader machines. For how long will we continue to sing this song about malfunctioning card reader machines? What about electronic voting? Why should we continue disenfranchising eligible voters simply because of avoidable technical hitches? By now we should have improved over our 2015 electoral gains and subsequent elections.”

On the death of former Vice President, Dr. Alex Ekwueme, the group said “LEPAN also uses this opportunity to register her condolences with the family of ex-Vice President, Dr. Alex Ekwueme, the people of Anambra state and the nation praying for the fortitude to bear the loss.The news of the death of the elder statesman came to us as a rude shock at a time when the whole nation is in need of his guidance. The passing on of a great statesman like the former Vice President who lived his whole life in the service of his fatherland is a great loss indeed.” The statement said.

The statement concluded by saying that LEPAN will continue to partner, support, and encourage any initiative to improve and promote youth participation and engagement in politics. He noted that the group will not rest until these objectives are attained.