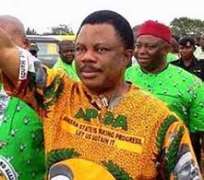 The Inspector-General of Police (I-G), Mr Mohammed Idris, said the withdrawal of the Aide Camp (ADC) to Gov. Willie Obiano of Anambra was to prevent the re-occurrence of past experience.

Idris gave the explanation during Election Stakeholders' Forum organised by the Independent National Electoral Commission (INEC) on Tuesday in Awka.

The News Agency of Nigeria (NAN) reports that Obiano had during the forum raised the alarm that he woke up on Tuesday morning to find that his ADC had been directed by the Police High Command to vacate him.

Obiano said that the directive had put his life in danger, describing the act as unacceptable and unfair treatment to his person and office.

The governor noted that his standing for re-election did not remove the fact that he was the Chief Security Officer of the state.

But the IG said the withdrawal of the ADC was based on the previous experience the police recorded whereby the military caught an ADC to an unnamed governor escorting a vehicle loaded with arms on Election Day.

“We do not mean anything bad to Anambra governor on this action; his ADC will be returned to him early Sunday morning after the governorship election on Saturday Nov.18.

“We have equally withdrawn all the policemen attached to political appointees, Local Government Chairmen and others in Anambra till after the election,'' he said.

Idris said that the Police Force had deployed 26, 000 personnel, 300 vehicles, three helicopters and 15 gunboats for the poll.

The deployment of policemen and other security personnel, he said, was not to cause panic, but to give the people the needed protection.

INEC Chairman, Prof. Mahmood Yakubu said everything had been put in place for the conduct of credible, free and fair election on Nov. 18.

“I will like to use this opportunity to declare as untrue the earlier claim by some people that sensitive materials for this election were uncovered in a hotel in Awka.

“The sensitive materials will arrive through the Akanu Ibiam International Airport, Enugu, and will be escorted like money to Awka by the Central Bank escort team on Thursday,'' he said.