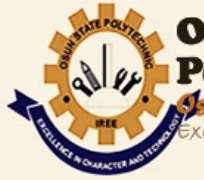 Students of Osun State Polytechnic, Iree, through their Union Government, have opposed to the increment of their tuition fee.

It would be recalled that the institution's tuition fee recently got increased to N59, 000 from N35, 000.

In a release signed by the Students Union President, Comrade Adegbaye Taiwo, the students ordered the State Governor, Ogbeni Rauf Aregbesola to reverse the fee within 7days or face mass protests and total hijack of peace of the state.

According to the release, "

Information reaching us from government officials is that a memo has been circulated to all state owned tertiary institutions management (Ilesa, Iree, Esa-Oke and Ilaorangun) that increment of tuition fee has been increased from 25,000 to 56,000 in Osun State Polytechnic Iree and Osun State polytechnic Esa-Oke while College of Education Ilesa and Ila-orangun has been increased from 25,000 to 45,000 respectively.

"Education is a right and not a privilege, we must also point out the fact that government is the duty bearer and we, the younger generation of citizens are the right holder in this context. Unfortunately for our generation, the present day duty bearers (the government and the institutions authority) who enjoyed these rights as students are depriving us of this legitimate right. Students are now treated like customers, the essence of education is already defeated when both the government and school authority see our institutions as a profit making venture.

"Aregbesola government budget less than 6% for the development and funding of education in the proposed 2018 budget and less than 8% in 2017. The resultant effect is before us all to see, decaying and inadequate educational infrastructure, outdated libraries, poor staff and students welfare, health center turn to death centers, poor academic environment, acute shortage of staffs and extortion in various forms by both management and state government.

"We will fight to resist all policies, programmes and actions using the instrumental of the law and all other lawful means to achieve basic welfare for the generality of the students and immediate reversal of all form of increment.

"We will employ constructive criticism, dialogue, congressional resolutions and constitutional rights as a citizen of this country to press home our fundamental right and beliefs and we will also work closely with all interests that seek the good of Nigeria Students.

"However, the leadership charged the Governor to face the reality of Governance and come up with policies that will liberate the Masses from the shackles of the present moment..Any attempt by the Government to increase tuition fee will be met with grave resistance from the Student Community. We hereby give Governor AREGBESOLA 7days ultimatum to reverse this satanic policy or face mass Protests and total Hijack of peace of the state of Osun."