A Y To Be Celebrated In Holland 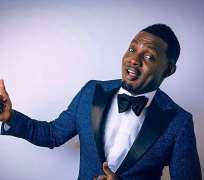 Ayo Makun, popularly known as A Y is due to be celebrated in Holland on the 17th of November 2017.

The Nigerian comedian will join other Africans and Friends of Africa, led by Her Excellency, Jeannette Nyiramongi Kagame, the First lady of Republic of Rwanda to this year's "The Voice African Achievers' Award".

The Voice African Achievers' Award is the biggest African event in the Central Europe. It is an annual assemblage of Africans and friends of Africa to celebrate distinguished individuals that have impacted positively on the lives of Africans.

This year's celebration will also mark the 18th anniversary of the publication of the first complete Pan African Publication in the Central Europe, "The Voice Magazine"

According to the organizers, A Y, the inventor of AY's crib , A.Y live shows, AY Open Mic Challenge and A.Y comedy skits was nominated because of his professional exploits in entertaiment industry in Nigeria and African continent. The multi talented comedian and one of African's best entertainer has promised to unleash jokes that will definetely crack the ribs of the audience.

A Y will be honoured and celebrated as he receives "African Inspirational Award" in the city of Amsterdam. The award is unique especially because of teaming African entertainers that he has lend his ladder of goodwill to climb to success.

The Publisher of The Voice Magazine, The Netherlands, organizers of the event, Elvis Iruh, says that all is set to celebrate African achievers in an uncommon style.

Nigerians in Holland have concluded a grand celebration of one of their own, ace comedian AY.