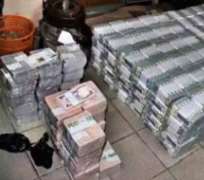 Justice Saliu Saidu of a Federal High Court in Lagos on Thursday ordered the temporary forfeiture to the Federal Government of Flat 7B, Osborne Towers, Ikoyi, Lagos.

The sums were said to have been found in iron cabinets and “Ghana-Must-Go” bags in April.

The judge issued the orders following an ex parte application by the Economic and Financial Crimes Commission (EFCC).

Before now, the anti-graft agency had mentioned the wife of the sacked Director-General of the Nigeria Intelligence Agency, Mrs Folashade Oke, as the owner of the flat.

The commission had insisted that it found out that Mrs Oke made a cash payment of 1.6 million dollars for the purchase of the flat between Aug. 25 and Sept.3, 2015.

The EFCC further argued that the woman allegedly purchased the property in the name of a company, Chobe Ventures Ltd, of which she and her son, were directors.

Payments were said to have been made to Fine and Country Ltd.

The company was said to have later converted the sums into N360 million and subsequently paid it to Fine and Country Ltd for the purchase of the property.

The judge adjourned the case until Nov. 30 for any interested party to appear and show cause why the interim forfeiture should not be a permanent forfeiture. (NAN)