Who built the Igbo pyramids? Mysteries yet to be unraveled 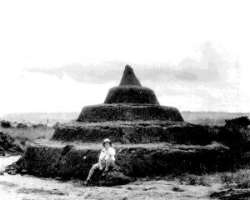 When and why were they built? How were they built, and who exactly were the people that built them? These questions about the fascinating Igbo pyramids located in Nsude on the Udi highlands of Enugu State, South-Eastern Nigeria, will remain mysteries and unanswered for now.

The ten step circular Igbo pyramids have been compared to the Step Pyramid of Saqqara in Egypt. Despite their relative obscure location and decades of obvious neglect, the Nsude ancient monuments still attract the interest of historians, scholars and tourists. However, their deplorable state places restraints on tourist enthusiasts whose patronage would have boosted its economic value.

The pyramids in their present state depict images of the 'signs' the ancestors in Birago Diop's poem, 'Vanity', had left 'in the air', 'on the land', ' on the waters', for their 'disobedient children' to follow that are blatantly ignored because the descendants crave for a foreign lifestyle despite strident ' warnings' of impending doom. Scholars believe that these monuments hold the possibility of rewriting Africa's history because they remain a compelling attraction for tourism. The existence of the pyramids also buttresses the fact that Africans had established tradition and culture before the advent of colonialism, contrary to the misleading claims of some European writers.

The first discovery of the Igbo Pyramid was credited to Luke Walter, a British explorer whose accounts of 1891 were not known to be documented until 1935 when photographs of the monuments were taken and printed by Mr. G.I. Jones, a British administrator and anthropologist. The pyramids were said to be traditional worship temples for the deity, Ala or Uto who was believed to reside at the top where a stick was placed to represent his residence.

When and how the Igbo (Nsude) Pyramids were built are mysteries yet to be unraveled, but the black and white pictures indicate their ancient origin. The technology employed as well as the exact reason for the construction is shrouded in mystery. At present, they lay in ruins and dire need of repair. They were believed to have served various purposes in ancient times including surveillance against potential invaders during inter-communal hostilities. There is construction of the monuments to the memory of Uto-Nsude, the community's war hero that is now deified. Despite repeated appeals by leaders of the community, there are no proofs of organized efforts or policy to preserve the pyramids from decadence.

The story is the same with the lone pyramid Ozougwu, head of the village union, decried the deplorable condition of the structures, explaining that even the lone pyramid at Umuaka located near the mysterious Iga Gate had almost been submerged by erosion. He revealed that a replica of the pyramids built by one of their past leaders in the 1970s at Obu Anukwu still exits, suggesting that the ancient heritage can be restored and preserved.

Genuine attempts at revamping Nigeria's ailing economy should include paying close attention to the nation's tourism potentials, which includes this ancient heritage, long neglected by successive governments and allied agencies. Scholars have copiously written on its history, socio-economic importance and significance as one of the surviving features of Africa's cultural heritage. Like the great walls of Kano, time has adversely taken its toll on the Nsude Pyramid. The structures, built with hardened red mud and clay had existed for centuries before they began to deteriorate due to neglect, which started during the colonial era. Although no available records reveal the actual period when the Igbo pyramids were erected, some studies suggest that they were built at the same period with those of Egypt.

The pyramid of Egypt, on the Giza Plateau in Cairo with the sculpture of the Great Sphinx, has become a symbol of the country's culture. Nigeria is yet to experience the benefits of the pyramids at Nsude. The present state of the Igbo pyramids located in Nsude on the Udi highlands of Enugu State, South-Eastern Nigeria, is a sad reminder of black Africa's great losses to modern civilization. Tourist attraction centers like these require the concerted efforts of relevant authorities to optimally serve their purpose which includes showcasing the continent's cultural heritage and boosting the nation's ailing economy.

The tourism industry needs to be fully explored with the view of harnessing its revenue generating potentials to augment those of other sectors as the country strives to steer the ship of her economy from age long dependence on oil to other possible sources of income generation. As at 2010, revenues from tourism in Egypt reached an excess of $12.5 billion. It also provided employment for about 12 percent of the labour force. The pyramids of Egypt play a pivotal role as the economic mainstay of that North African country attracting about 14.7 million tourists annually. This clearly suggests that the Nsude Pyramid is an untapped goldmine.