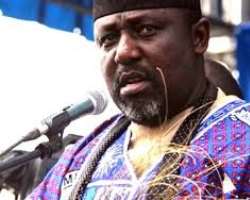 Walter Duru
A socio-political group, G42 Imo Liberation Forum has warned the state government to desist from what it described as a waste of tax payers’ money over its alleged plans to spend a whooping Eight Hundred and Fifty Million Naira on erecting a Christmas tree ahead of the Christmas celebration.

A statement signed by the Director of Communications of the group, Dr. Walter Duru and made available to newsmen further described the plan as a misplaced priority, even as he accused the government f insensitivity.

“The attention of G-42 Imo Liberation Forum has been drawn to an alleged plan by the Imo State Government under the leadership of Chief Rochas Okorocha to spend about Eight Hundred and Fifty Million Naira on a meaningless Christmas tree ahead of the 2017 Christmas celebration.”

“This is coming at a time Civil Servants and Pensioners in the state are being owed several months arrears of salary and other entitlements; while poverty is at its highest level in the history of the state.”

“The situation is made worst by the fact that the dust raised by the over Five Hundred Million Naira allegedly spent in the building of a Statue for the President of South Africa, Jacob Zuma is yet to settle.”

“We refuse to treat this as mere speculation as history has shown that this is not far from the style of the present administration in the state; a government that is not accountable to anyone and is run in utmost secrecy. The government must tell Imo people how much it actually spent on erecting the ridiculous Jacob Zuma Statue and others there-in, as well as the said Christmas tree. “

“The G-42 Imo Liberation Forum, a Socio-political group in the state sees this as the highest level of insensitivity, misplaced priority and share waste of the people’s resources and hereby condemn it.”

Continuing, Duru accused the Okorocha-led government of disrespecting the citizens of the state, even as he urged him to discontinue the project and pay attention to the welfare of the citizens.

“The present APC-led government must realize that it is holding the people’s resources on thrust and therefore accountable to the people. This administration has treated Imo people with so much disrespect and disdain that we can no longer fold our arms to allow this anomaly to continue.”

“We therefore call on the state government to discontinue the wanton waste of the peoples’ resources and invest the people’s resources in areas that are beneficial to majority of the citizens.”