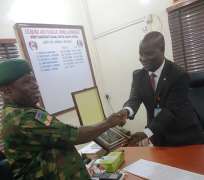 Udoh gave the commendation on Wednesday while paying a courtesy visit to the Port Harcourt Zonal office of the Commission. According to him, “the EFCC has been very supportive and effective in tackling the menace of illegal oil bunkering. The Niger Delta is very significant to the economy of Nigeria. Any economic crime directly affects the economy. So, what the EFCC is doing by combating bunkering is significant. This alone is helping to stabilize the economy".

Also, the GOC explained that his Division is vested with the task of cracking acts of economic sabotage in the Niger Delta region like illegal oil bunkering; pipeline vandalism, crude oil theft, illegal oil refining and other environmental crimes peculiar to the region. He called for increased inter- agency collaboration and support to rid the region of practices inimical to economic growth and development.

Udoh said that the EFCC has shown that it is an agency serious and steadfast in carrying out its assigned mandate and charged it not to rest on its oars.

In his response, the Zonal Head of the EFCC, Mr. Ishaq Salihu thanked General Udoh for his visit and assured his Division of enhanced support, collaboration and synergy in the overall interests of the nation. " We are aware of the strategic importance of the Niger Delta to the economy of the nation and this is why we have been making coordinated and sustained efforts to check illegal oil bunkering and other economic and financial crimes in the region. Our efforts are yielding results and we will not look back in carrying out our assigned functions."

Salihu assured that the EFCC will continue to do its best to fight all forms of corrupt practices in the South- South.