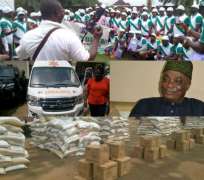 In a bid tocutting down the effect of recession in Delta State, the Senator representing Delta North Senatorial District in the National Assembly (NASS), Senator Peter Nwaoboshi, has empowered 784 persons aimed at boosting micro-credit businesses.

The 784 beneficiaries, who received N50, 000 each, totaling N39.2 million, were selected from the nine Local Government Areas that make up the District.

The Chairman, Peoples' Democratic Party (PDP), Delta North, Hon Moses Iduh, made the disclosure in a chat with newsmen after presenting the empowerment package to 168 beneficiaries from Aniocha South and North Local Government Areas, to round up the 2017 tranche of the programme.

Hon. Iduh, who led the committee Chaired by Chief Lawrence Osiegbu, during the presentation, said the programme was in fulfillment of Senator Nwaoboshi's campaign promises.

He disclosed that eight beneficiaries were randomly selected per ward from the 98 wards to make up 784 beneficiaries, adding that the empowerment was spread across the nine local governments of Delta North Senatorial District.

Also speaking, Commissioner for Water Resources, Chief Fidelis Tilije, while commending the Senator stated that Nwaoboshi had ensured, through various empowerment packages, that he delivered on his mandate.

Chief Tilije advised beneficiaries against giving their money to party executive or for frivolous indulgences but rather put it to judicious use.

The Chairman of Aniocha North, Hon. Chucks Oseme, and his Aniocha South counterpart, Chief Isaac Awuzia, commended the initiative and urged the people to continue to vote for the PDP which they described as the only party with the true prosperity plans for all.