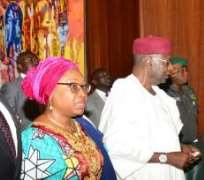 President Muhammadu Buhari on Wednesday summoned his Chief of Staff, Abba Kyari, and the Head of the Civil Service of the Federation, Winifred Oyo-Ita, over their clash at the Council Chambers of the Presidential Villa, Abuja.

The fierce crossfire between Kyari and Oyo-Ita, which occurred shortly before the Federal Executive Council meeting, was believed to have been caused by the leaked memo, which Oyo-Ita sent to Kyari on the controversial reinstatement and posting of the embattled former chairman of the Pension Reforms Commission, Abdulrasheed Maina.

A source at the meeting said Kyari accused Oyo-Ita of leaking the memo, which she wrote to the CoS on the reinstatement of Mr Abdulrasheed Maina into the Civil Service.

In the memo, which was exclusively published by The PUNCH on Tuesday, Oyo-Ita said that she warned the President against asking Maina to return to the civil service, saying doing so could affect the anti-corruption war of the Federal Government.

Oyo-Ita, it was gathered, also accused Kyari of being the brains behind the leakage.

The altercation occurred in the presence of Vice-President Yemi Osinbajo; President of the Senate, Bukola Saraki; Speaker of the House of Representatives, Yakubu Dogara; National Chairman of the All Progressives Congress, John Odigie-Oyegun; service chiefs and ministers.

Saraki, Dogara, Oyegun and the service chiefs were present to witness the inauguration of the new Secretary to the Government of the Federation, Boss Mustapha, as well as the launching of the 2018 Armed Forces Remembrance emblem.

A Presidency source, who spoke to our correspondent on condition of anonymity on Wednesday, said the President was embarrassed when he was briefed about the altercation between Kyari and Oyo-Ita.

He said even the presence of the Vice President did not deter the two officials from the clash.

In the memo, Oyo-Ita had claimed that her warning was based on the implications Maina's reinstatement would have on the anti-corruption war of the Federal Government.

The memo, titled, 'Re: Abdulrasheed Abdullahi Maina,' was received in the office of the Chief of Staff to the President on October 23.

The President had directed the HoS to investigate the circumstances that surrounded the return of Maina to the civil service.

He gave the directive following the public outcry that trailed Maina's reinstatement.

Maina, whose whereabouts are still unknown, has been accused of embezzling pensioners' funds running into billions of naira and is currently under investigation by the Economic and Financial Crimes Commission.

Explaining further, the HoS said she met the President after the Federal Executive Council meeting on Wednesday, October 11, and verbally warned Buhari against bringing Maina back to the service.

She, however, did not say what the response of the President was after briefing him.

Oyo-Ita said, “Please, note that the OHCSF was never in agreement with the reinstatement and consequently never conveyed the approval of the FCPC to Mr. A. A. Maina, nor approved his posting to the Ministry of Interior or any other MDA.

“Rather, I sought audience with His Excellency, Mr. President on Wednesday, 11th October, 2017 after the FEC meeting where I briefed His Excellency verbally on the wide-ranging implications of the reinstatement of Mr. A. A. Maina, especially the damaging impact on the anti-corruption stance of this administration.”

The letter also read, “Further to your letter Ref. SH/COS/100/A/1570 dated 23rd October, 2017 on the above subject matter, I write to inform you of the circumstances leading to the irregular recall of Mr. Abdulrasheed Abdullahi Maina.

“I wrote to place on record the following facts as it permits (sic) to Mr. A. A. Maina who was dismissed from service on 21st February, 2013.

“The move to recall Mr. A. A. Maina was at the instance of a series of letters from the Attorney General of the Federation to the Federal Civil Service Commission requesting the commission to give consequential effect to the judgment that voided the warrant of arrest issued against Mr. A. A. Maina, which formed the basis for the query and his eventual dismissal.

“The letters herewith attached as Annexes I-III are:

“The FCSC thereafter requested that the Head of the Civil Service of the Federation should advise the Permanent Secretary, Ministry of Interior to consider the AGF's letter and make appropriate recommendations to the commission and this was so communicated to the Ministry of Interior.

“The Ministry of Interior took the matter to the Senior Staff Committee of the ministry and recommended the reinstatement of Mr. A. A. Maina into the service as Deputy Director.

“The OHCSF forwarded the recommendation to the FCSC which has the constitutional responsibility for appointments, promotion and discipline for further action.

“The FCSC in consideration of the letter from the AGF and the recommendations of the SSC of the Ministry of Interior consequently approved and conveyed the reinstatement of Mr. A. A. Maina with effect from 21st February, 2013 vide letter herewith attached as Annex IV.

“Please note that the OHCSF was never in agreement with the reinstatement and consequently never conveyed the approval of the FCSC to Mr. A. A. Maina nor approved his posting to the Ministry of Interior or any other MDA. Rather, I sought audience with His Excellency, Mr. President on Wednesday, 11th October, 2017 after the FEC meeting where I briefed His Excellency verbally on the wide-ranging implications of the reinstatement of Mr. A. A. Maina, especially the damaging impact on the anti-corruption stance of this administration.

“However, I have requested the Permanent Secretary, Ministry of Interior, to provide any documentary evidence to support the claim of reinstatement and posting of Mr. A. A. Maina by OHCSF, since after his dismissal.

“The letter to the Permanent Secretary, Ministry of Interior is attached as Annex VI. The foregoing is accordingly submitted for your information and further consideration.

“Please accept the assurances of my best regards.”
Punch