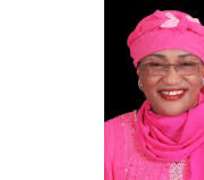 The national leadership of APC Youths Renaissance has thrown its full weight behind the call on the Honourable Minister of Women Affairs and Social Development, Senator Aisha Alhassan to run for the 2019 governorship race of the state by APC Youths and Women Leaders as well as other APC support groups in the state.

This is sequel to the insinuation in some quarters that there would be no party primary to determine who becomes the standard flag bearer of the party in Taraba State.

This is far from the concept and the intents of the call on the minister by the Taraba State youths and women leaders of our great party to contest the governorship race.

Hence, the decision of the APC Youths and Women leaders as well as other support groups in the state to call on the Minister to run for the 2019 governorship race in the state is not out of place but as a result of her sterling leadership qualities exhibited over the years as well as her impeccable character as mother of all Tarabans.

Suffice to say that there is nothing unusual in the call by the youths and women wings of the party on a very popular candidate in the person of Senator Aisha Jummai Alhassan popularly known as 'Mama Taraba' to run for the state's governorship race in 2019.

It is akin to the call on Governor Nasir El-rufai and President Muhammadu Buhari to seek reelection in 2019 by the Kaduna State Stakeholders of our Party.

It is also akin to the call on President Muhammadu Buhari by the Adamawa State Stakeholders of the party to seek re-election in 2019.

Therefore, there is nothing wrong whatsoever on the call on Mama Taraba to contest the 2019 governorship race of the state by the Youths and Women leaders of our great party in Taraba State.

Our party has respect for internal democracy and would throw it open to all interested aspirants to test their popularity and acceptance among party faithful.

Anybody insinuating something contrary is only being afraid of his own shadow before the main contest.

Therefore, we call on all loyal party members in Taraba State especially the youths and women wings of our great to remain calm and focused in the pursuit of their avowed goal.