Daily Trust Extends Entry for African of the Year Award 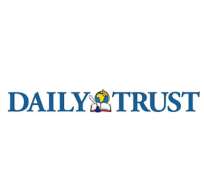 The deadline for nomination of candidates for the coveted African of the Year 2017 award has been extended to November 6.

In a statement yesterday, Associate Director of DAILY TRUST, promoters of the award, Aliu Akoshile, said the extension was to give equal opportunities to every part of Africa to nominate eligible candidates for the award.

He said a valid entry will be for humanitarian works, events or activities undertaken by the nominees within one year, from October 1, 2016 to September 30, 2017 adding that nominations are to be made online at www.award.dailytrust.com.

Mr. Akoshile said the winner will be selected by a seven-member prize committee chaired by Mr. Festus Mogae, former president of Botswana and past winner of the Mo Ibrahim Prize for Leadership.

Now in its 8th edition, the African of the Year award was inaugurated in 2008 by DAILY TRUST, Nigeria’s foremost independent newspaper in fulfilment of its commitment to African unity and sustainable development across the continent.

The award project enjoins the support of UBA Plc, Africa’s global bank, which gives US$50,000 annually since 2008.

With this annual award, Mr. Akoshile said Daily Trust is promoting the culture of selflessness among Africans with the aim of creating a pool of role-models for others to emulate.

The maiden award in 2009 was presented to a Congolese gynaecologist, Dr. Denis Mukwege, in recognition of his exemplary humanitarian offer of free reconstructive surgery to victims of rape in the war-torn Democratic Republic of Congo, DRC.

Dr. Mukwege had been short-listed twice for the Nobel Prize and in 2014 he won the Sakharov prize for freedom of thought, European Parliament topmost human rights award, among other laurels.

The subsequent awards have been won by the late Dr. Tajudeen Abdulraheem (2009), Mr. Danny Jordan (2010), Judge Mrs. Fatimata Bazeye (2011), Mr. Thabo Mbeki (2012) and Dr. Donald Kaberuka (2013). The 2014 and 2016 awards were skipped owing to the prevalence of Ebola disease in parts of Africa and exceptional challenges of funding respectively, while Mr. Gregoire Ahongbonon emerged winner of the 2015 award.