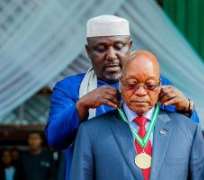 South Africa's National Prosecuting Authority (NPA) said it had given President Jacob Zuma till Nov. 30 to make submissions before it.

According to the authority, Zuma's submission would make it decide whether to reinstate 783 corruption charges filed against him before becoming the president.

The NPA said on Friday that any further representations by the South African president should relate to issues not previously considered by authorities.

The Supreme Court of Appeal had on Oct. 13 upheld a High Court ruling to reinstate the charges filed against Zuma.

They were set aside in April 2009 by the then head of the prosecuting authority, paving the way for him to run for president later that year.

In another development, Zuma's spokesman Bongani Ngqulunga said there was no basis for the speculation that Zuma would axe his vice, Cyril Ramaphosa.The speculation has weighed on the currency and bonds.

The ruling African National Congress (ANC) party which Zuma leads and Ramaphosa deputises has been driven by bitter fights ahead of a party conference in December where a new leader will be chosen.

“It's rumours and gossip, and we don't comment on them at all,” Ngqulunga told Reuters.

Ramaphosa, a trade unionist turned business tycoon, is viewed as the most likely rival candidate to Nkosazana Dlamini-Zuma, the former Chairperson of the African Union and president's ex-wife.

He has recently stepped up criticism of Zuma's scandal-plagued government.

Asked in parliament on Thursday whether he might be sacked, Ramaphosa said that he would only accept the president's decision, if he loses his job.

South Africa will elect a new president in 2019 and whoever the ANC picks in December is likely to take over from 75-year-old Zuma as the country's leader.

Zuma is under pressure to step down before then with the recent court ruling bordering on the 783 corruption charges against him.

Zuma reshuffled his cabinet again within seven months on Tuesday, sacking a minister from the SACP and appointed his close ally to oversee an opaque nuclear deal.

The development has irked some within the ruling alliance.

Analysts said that Zuma might likely make further changes before December to strengthen his hand into the ANC's elective conference.

Speculation that he might remove Ramaphosa, who was the ANC's chief negotiator during the 1990s transition from apartheid, weighed on the rand and bonds.

“Other emerging markets are weaker but not as much as the rand.

“This is because of lingering political uncertainty, especially the rumours about Zuma axing Ramaphosa,” currency dealer at TreasuryOne, Wichard Cilliers said. (Reuters/ NAN)