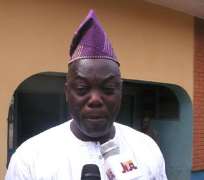 In a release signed by the it acting Coordinator, Com. Tijani Sikiru and secretary, Com. Adeniji Yahaya, AGF urged the new HOS to bear his age long experience and professionalism in his new appointment.

Olowogboyega was appointed, sequel to the resignation and voluntary retirement of Mr. Sunday Owoeye as the Head of Service on Monday.

Expressing confidence that the new HOS has sufficient education, exposure and experience to carry on with the new responsibility, the group said the experience should be applied appropriately towards the development of the state.

AGF also expressed confidence that with the experience in the labour unionism, core civil service, it would help the new HOS to further strengthen the existing relationship between the government and its workers.

He joined the Civil Service on January 11, 1991 through the Local Government Service Commission of the old Oyo State and was part of the Osun indigenes that returned home as pioneer staff of the newly created state on August 27, 1991.

He also bagged LLB and LLM degrees in Law from Obafemi Awolowo University and was called to the Nigerian Bar in 2005.

He had a start in life with his elementary education at St. Peter’s Anglican Primary School, Oke-Owu, Orile-Owu between 1966 and 1973 before proceeding in succession to The Apostolic Secondary Modern School Orile-Owu and Orile-Owu Grammar School in the State of Osun between 1973 and 1979 for his post-primary education.

He had a stint at the Local Authority Teacher Training College, Iyana-Offa, Ibadan, Oyo State in the 1979/80 session before proceeding to Adeyemi College of Education, Ondo for NCE between 1981 and 1984. He observed the mandatory National Youth Service in the old Borno State (present-day Yobe State) between 1984 and 1985.

He traversed the State of Osun, working in various capacities in the local governments before his appointment as permanent secretary in 2012.

Dr Oyebade has attended conferences, seminars and training programmes at home and abroad in varying fields which include conflict resolution and leadership, among others.

He is married with children.

AGF felicitated with him on this appointment and wished him a fruitful and successful service to the government and the good people of Osun.