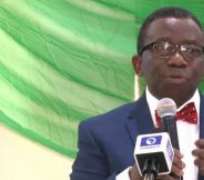 THE Monkey pox virus outbreak has spread to 11 states with 74 suspected cases recorded, according to Isaac Adewole, minister of health.

Adewole who stated this in Abuja on Wednesday when he briefed State House correspondents on the outcome of the meeting of the Federal Executive Council which was chaired by President Muhammadu Buhari, listed the affected States as Akwa Ibom, Bayelsa, Cross River, Delta, Ekiti, Enugu, Imo, Lagos, Nasarawa and Rivers as well as the Federal Capital Territory.

He said: “The Council also received an update on the state of the public health of the nation.We informed the council about the latest development in respect of the Monkey Pox virus outbreak. So far, as of today, there are 74 suspected cases in 11 states of the country.

“We have confirmed three from Bayelsa and 12 of the suspected cases from Bayelsa tested negative; four suspected cases from Lagos tested negative. We are still expecting the results of the other ones. We are also doing test at the African Centre of Excellence for Genomics of Infectious Diseases, Edeh, to really understand the genomics of this virus.

Even when they are negative, the laboratory attendant should be able to tell us what exactly they are.”

The minister dismissed the assertion that the military was spreading Monkeypox virus through vaccination.

Adewole said the military was never involved in any vaccination in the country, adding that any vaccination must involve state governments and the Federal Ministry of Health.

He said: “It is also important to dispel the rumour circulating in the country that the military is vaccinating people and trying to spread Monkeypox across the country.

Realnews reports that Monkeypox is a rare virus transmitted to humans from animals, with symptoms in humans similar to those seen in the past in smallpox patients, although less severe. Smallpox was eradicated in 1980.

However, monkeypox still occurs sporadically in some parts of Africa.