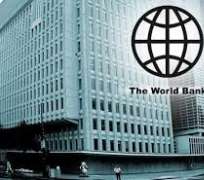 The World Bank has disagreed with the Minister of Finance, Mrs. Kemi Adeosun, on the need for the Federal Government to borrow more in order to develop the nation's infrastructure and stimulate the economy.

A report by Newsrangers said that the  World Bank  Senior Economist, Gloria Joseph-Raji, made the position known in Abuja while speaking to its correspondent.

The online platform said JOSEPH-RAJI spoke to its correspondent on Monday.

The World Bank official said   the cost of borrowing or paying interest on Nigeria's debt was not sustainable as revenues to make such payment had dried up.

She spoke with our correspondent on the sidelines of the lunch of Africa Pulse, a biannual report on Africa.

Adeosun said on Sunday at a press briefing rounding off the World Bank/International Monetary Fund annual meeting in Washington DC, United States that Nigerians would have to tolerate more borrowings in the short term for the government to deliver critical infrastructure.

But Joseph-Raji said that dwindling revenues had raised a concern both at the Federal Government and the World Bank on sustainability of Nigeria's borrowings as debt-to-revenue ratio had increased by 25 per cent within a period of one year.

She said in 2015, the country's debt to revenue ratio stood at 35 per cent but rose to 60 per cent by 2016, reflecting a reduction in government revenues and rising debt profile, thereby raising a question about the debt sustainability.

“The government is aware that the debt is looking more unsustainable from the point of debt service to revenue ratio. The estimate we had for last year at the federal level was about 60 per cent. That is coming from about 35 per cent in 2015.

“That reflects the substantially lower revenues that Nigeria recorded last year. Even among the state governments; we know that a lot of state governments are servicing a lot of debts from their federation account allocation. So, there is really going to be a sustainable issue emerging.”

The World Bank expert said she was concerned about the sustainability of the country's debt, especially the huge domestic borrowing with high interest rate, which prompted the Debt Management Office to come up with a strategy to rebalance the country's debt portfolio.

She said, “The DMO released the Debt Management Strategy 2016 to 2019 last year. The strategy was to rebalance the debt portfolio from more of domestic now to more of foreign. That is because of the debt servicing cost.

“Before now we had a debt portfolio of about 80 per cent domestic to 20 per cent external. We know that the debt servicing cost of domestic debt is really high. Treasury bill is an average of 18 per cent; the FGN bonds, from 16 per cent. The government is trying to rebalance its portfolio with foreign debt, which has much lower interest rate than domestic debt. That is why this year you have seen them go for Eurobonds, with a total of $1.5bn in the first quarter of the year. They also did Diaspora bond of $300m. If you look at the yield on those bonds, they are much less than 10 per cent.

“The government is aware that there is a sustainable issue and that is what they are trying to correct by taking more foreign debt.”

Joseph-Raji said in the light of expenditure exceeding revenue, government should borrow, but it should borrow in a manner that was sustainable.

Also speaking on the issue in an interview with our correspondent, the Head of Abuja office of Social Action, a Non-Governmental Organisation active in debt relief advocacy, Mrs. Vivian Bellonwu-Okafor, said the government needed to think about better ways of managing the economy.

She said borrowing $3bn from abroad to refinance local debts was replacing one evil with another evil.

She said, “The $3bn debt refinancing arrangement, as proposed by the Federal Government, does not solve the country's rising debt problem; it merely trades one evil for another.

“Borrowing longer-term foreign loans to pay off maturing short-term domestic debt, instead of taking actual steps to gradually reduce and exit debt overhang, is a demonstration of poor economic management.

“Several developing countries have adopted far-reaching domestic strategies to mitigate the effects of international market shocks and global financial crisis. While countries like Malaysia are increasing internal investments to develop their economies and make them as independent and vibrant as possible, rather than shrink deeper into global financial waters, Nigeria seems to be doing quite the opposite; preparing frameworks and opportunities for more foreign exchange and capital flight from the country in annual debt servicing.”

In another telephone interview with our correspondent, a financial expert and associate professor, and Head of the Department of Banking and Finance, Nasarawa State University, Dr. Uche Uwalaka, said there was no doubt that Nigeria's debt to revenue ratio was high.

According to him, the use of the index is a better way to measure a country's capacity to pay debt and interest.

Although he said that the country hardly had any better option than to borrow, he insisted that debts should be tied to projects that were self-liquidating.

He said, “There is no doubt that the country's debt burden is high going by the debt to revenue ratio. There are other measures of the debt burden such as the debt-to-GDP ratio, which is currently around 18 to 19 per cent.

“External debts are cheaper to service especially when they come from multilateral sources. The attention of government has shifted to foreign debt. I am in support of government's plan to borrow $3bn to refinance some local debts. What is important is that the National Assembly and other agencies should focus on is the monitoring of what we do with foreign loans. This is because foreign loans also have their own risks such as shock in exchange rates.”

Uwalaka said other options to borrowing such as sale of national assets, increase in taxes and printing of money were not viable in the present circumstances of the country