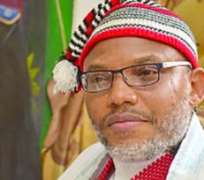 Umuahia, Abakaliki – Anthony Michael Ogbizi, Commissioner of Police in Abia, on Thursday said that lethal weapons, including petrol bombs and one double-barrel gun, were recovered during last Sunday’s raid of the residence of the leader of the Indigenous People of Biafra (IPOB), Nnamdi Kanu.

Ogbizi disclosed this while fielding questions from journalists before commencing a closed-door meeting with the Area Commanders (ACs) and Divisional Police Officers (DPOs) in the state at the Officers Mess, Umuahia.

Their second visit to the separatist leader’s residence at Afaraukwu Ibeku in Umuahia, Abia State, was to unearth incriminating items reported to have been kept there, the police commissioner said.

The raid took place on Sunday and sparked off bitter controversies concerning the haul of items reported to have been carted away by the joint team.

Ogbizi claimed that the second invasion produced worthwhile dividend which the Nigerian security was working on.

According to him, the joint security team recovered a short gun, a double barrel gun, Biafra’s insignia, Biafra’s flags, letters to some national and international organisations and other documents “which are helping us in our investigations on the activities of the separatist group”.

He said: “We’re analysing the documents and the items we recovered with a view to determining the next line of action.”

The second raid came a month after military troops invaded the same home on September 14, 2017, at the beginning of Operation Python Dance, an ongoing military exercise in the South East.

The whereabouts of Nnamdi Kanu is still unknown since then.

Reports claimed that in that first mission, properties were destroyed in Nnamdi Kanu’s home while lives were allegedly lost elsewhere in the town.

The police commissioner, however, denied reports that the soldiers and the policemen that raided the IPOB leader’s house the second time carted away valuable items.

He said one suspect was arrested in Nnamdi Kanu’s home during the second raid and that he is now helping the security in their investigations.

“I know the sensitive nature of the assignment and that’s why I told the deputy commissioner of police, who led the operation, to document all items recovered from the operation,” he noted, adding, “nobody removed anything from his house other than what I have told you.”

The Abia CP urged members of the group to come out from hiding and stop spreading what he called false information against Nigeria.

He insisted that the rumour that soldiers were injecting killer vaccines on children in the South East in the guise of immunising them was initiated by IPOB members.

The police commissioner explained that there were no roadblocks in any part of the state at present.

There had been some road checks when the activities of IPOB were high, he said.

“Anywhere you see any roadblock by the police, snap (take a photograph of) it and bring it to my notice,” he told journalists.

Asked why money was demanded as a condition for bail by his men, the Abia CP warned the public not to pay money for bail.

According to him, “Bail is free and free indeed”.

He disclosed that to demonstrate the seriousness of the warning against offering money for bail, any policeman or woman caught demanding money as a precondition for granting bail in any police station in the state would be severely dealt with.

He appealed to members of the public to report any policeman or woman who demanded money for bail to his office.

Again, IPOB Vows To Stop Anambra Election
Meanwhile, the proscribed pro-Biafran group, IPOB, has vowed to ensure that no election holds in Anambra State on November 18.

It slammed South East governors, the leadership of Ohanaeze and other leaders of the zone for allegedly working with President Muhammadu Buhari to suppress the group and its activities in the zone.

IPOB expressed this view in a statement by its Spokesman, Emma Powerful, on Thursday.

Powerful said the governors of the zone and the leadership of Ohanaeze had been promised political appointments and other gifts by President Buhari for their role in the temporary suppression of the activities of the group in the zone.

The spokesman stated that the group had received an intelligence report which claimed that over 28 compromised Igbo leaders, including governors and the leaders of Ohanaeze, had been invited to a party with President Buhari today, Friday, October 13, in Aso Rock.

He said the governors and the president would be celebrating the suppression of the activities of IPOB in South East at the party.

He maintained that contrary to their belief that they had destroyed IPOB, the group would soon bounce back with more actions.

He said the group had been re-strategising.
According to him, IPOB would use the forthcoming November 18 governorship election in Anambra State as a dry run for what they would do in the zone if a referendum was not conducted very soon.

Part of the statement reads: “We the family members of the Indigenous People of Biafra (IPOB) and its leadership worldwide, under the command of Mazi Nnamdi Kanu, wish to bring to the attention of Biafrans and the entire world the purported thank you visit to Aso Rock by South East governors and Nnia Nwodo in the company of 28 compromised Igbo leaders, scheduled for tomorrow, October 13.

“IPOB has learnt that this meeting tomorrow in Abuja was at the instigation of the presidency, to thank Ohanaeze Ndigbo and Igbo political leaders for their support in the brutal crackdown and killing of unarmed IPOB members.

“They will also toast to what they erroneously think is a ‘successful’ suppression of IPOB activities.

“This assumption that IPOB structures have been dismantled is not only foolish but unfounded because we are still holding our meetings and strategising to shut down Anambra State on 18 November, 2017, the very day the world will know how dominant IPOB ideology is across Biafraland.

“It is now obvious that Ohanaeze Ndigbo, along with Igbo governors, is now involved in creating new and novel ways for Hausa/Fulani dominated Nigerian army to kill unarmed members of IPOB and civilians in Biafraland, particularly in South Eastern states.”

The group noted that it was “an abomination that Igbo governors and Ohanaeze Ndigbo had to sacrifice the blood of 81 young men and women just to gain the promise of eight Federal Government appointments” that they had been promised.