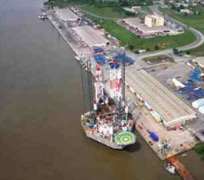 Provision of a deep seaport and a super highway for Cross Riverians were the twin signature projects which the Governor of Cross River State, Senator Ben Ayade pledged to actualize for the state using all means possible during his inauguration as the Governor of the state in 2015.

In view of the fact that the 38 years old Calabar Port does not have the required depth, facilities and capacities to handle volumes of cargoes needed to stimulate the kind of economic activities expected to transform the state, this deficit therefore informed the desire for a deep seaport.

But two years on, the excitement which greeted this proposition waned, as strict bureaucratic requirements coupled with conspiracy in some quarters seemed to scuttle this noble venture. The combination of both and other sundry restrictions were the initial clogs in the wheel of the immediate take-off of this laudable project. The recent disclosure by the state governor, that the FGN has appointed a transaction advisor for the project is the silver lining that gave a vista of actualization of that dream.

The deep seaport in itself would not be complete without the evacuation corridor for the imports; this also necessitated the proposed 260km super highway. The proposed six-lane highway spans 162 miles across the length of the geographical space of the state from Bakassi in the South up to Northern part of the state which borders with Benue state in the North Central Nigeria. This $3.5 billion project represents a single most ambitious and audacious effort of any previous government in the state to frontally attack under-development bedeviling the state in order to liberate it from the shackle of poverty and backwardness.

As promising as this twin vision of deep seaport and super highway appear to be, I have however come across many analysts who have penchant to serially disparage and deprecate these prospects. For instance, many have questioned the rationality of such initiative that is bound to gulp billions of dollars at the time of national austerity. Others have claimed the ubiquity of similar projects in the southern part of the country in such places like; Tin Can Island, Apapa, Lekky and Badagry in Lagos, the ongoing Ogun and Ondo joint deep seaport project in Olokola and the one at Ibaka in Akwa Ibom state.

They premised their pessimism on the current under-utilization of existing ports facilities in the country due to insufficient cargo volumes outside the demesne of Lagos. It is reported that even the ports in Lagos state have up to 50 – 60 percent capacity utilization while Warri, PortHarcout and Calabar purportedly have about 25 percent.

There are still many who do not see market prospects in deep seaport ventures in Nigeria, they do not understand the comparative advantage Cross River has over other states in such projects. Take for instance, the strategic geographical position of the state and its propinquity to the land locked states in the northern flank of the country. The proposed super highway would reduce the risk and the distance involved in transporting goods from Lagos ports up north; thus making Bakassi port a preferred business destination that would be patronized even by neighbouring countries that border northern part of the country.

Another prospect as announced by the governor is that vessels conveying goods into the country would not go back empty as there would be agricultural produce for export. With this development, I think Cross River State is at the threshold of its El Dorado. The state is on its way to becoming economic hub of West African sub-region. There is no doubt that these business prospects and projects would radically revolutionize and galvanize its economic potentialities that would industrialize the state.

Now with the appointment of the transaction adviser for the project, the governor has assured that reclamation work would commence soon while the actual work is expected to follow suit still within the year.

We hope that this response from the president is an indication that all encumbrances that hitherto held back the project have been resolved. It is our belief that this would also have positive implications for the proper take-off of the suspended work on the super highway. Issues about environmental impact assessment, preservation of biodiversity, proper compensation of the affected communities and others should be amicably handled to avoid any further delay.

Whatever may be the misgiving about the project, whether by conviction, connivance or confusion, the people should be convinced that it is one project that has the capacity to transform the economic fortune of the state and its people.

We therefore enjoin all the residents and citizens of the state to embrace this development and also appreciate the president and commander-in-chief for his support for these projects.