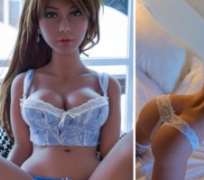 Doing the robot no longer refers to just the dance move.

YouGov, an Internet-based market research firm, found that 49 percent of American adults believe that having sex with robots will become common practice within the next 50 years.

The study, which surveyed 1,146 adults ages 18 and up, found that only 9 percent of women polled would consider having sex with a robot. However, one in four men, or 24 percent, were open to the idea.

The appearance of the robot was an important factor for both men and women as 52 percent of those contemplating robot lovemaking agree that it is essential for the bot to resemble a human.

Nevertheless, its clear that sex robots are here to stay, and becoming more of a reality every day.

SEX ROBOT sales have tripled in the UK over the past six months.

The robots, a modern version of the sex doll , have proved so popular in Asia that they have made their way to UK shores.

Sex robots are hyper-realistic dolls with feature like built-in heaters to mimic body warmth – they also have sensors to react to touch. A brunette sex robot in a night gown lies back on an unmade bed.

The robots can even form an “emotional connection” and often come with an app that can control their mood and settings – and even give her a pulse.

Silicone Sex World is the first outlet in the country to import the sex toys and said they receive between 20 to 30 enquiries per day about them.

Product specialist Andy Phelps said: “There is still a lot of debate about whether sex robots should be allowed or not so there is definitely an element of the taboo which is intriguing to many.

“You can essentially fulfil your fantasies without having to have a relationship and everything that comes with it. ”

Andy Phelps
“The reality is that we live in a day and age where you can get everything you want delivered to your door and that is applicable to sex in some respects.

“While they have been somewhat controversial, sex robots give people the opportunity to experience as close a thing to sex as possible without actually having to open the front door or interact with people.

“You can essentially fulfil your fantasies without having to have a relationship and everything that comes with it. The dolls are so realistic now that it isn’t too dissimilar to real human sex.”

However for Silicone Sex World their most popular product remains the fully customisable Sidney silicone TPE sex doll worth £1,500, considerably less than a robot.

Andy added: “The robots are fairly expensive when you compare the cost with a standard silicone sex doll, which can be custom built for under £2000.

“However, they promise a totally different experience and, although many customers are put off by the price now, we expect to see a drop fairly soon which will bring the price tag down much closer to the £1500 or so that our customers expect to pay.”