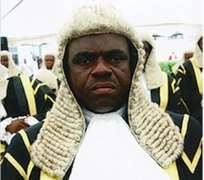 Justice John Tsoho of the Federal High Court, Abuja on Tuesday ordered the transfer of a case file of alleged Boko Haram kingpin, Mohammed Usman a.k.a Khalid Al Barnawi to Chief Judge of the court for re-assignment.

Tsoho made the order upon an application brought before the court by Usman and seven others standing trial for terrorism and murder allegations.

The rest are Mohammed Salisu a.k.a Datti, Yakubu Nuhu a.k.a Bello Maishayi and the only female among them, Halima Haliru

The judge said justice was rooted in confidence, adding that a court or judge was bound to withdraw from a case once the court's integrity was being questioned.

“The court withdraws forthwith from hearing this particular matter and the case file is hereby transferred to the Chief Judge of the court for re-assignment''.

The Federal Government on March 13 arraigned the Boko Haram suspects for the killing of five foreigners who were abducted from a construction site in Kebbi State in 2011.

The defendants were also accused of culpability in the murder of seven other foreigners in Borno State, who were abducted from another construction site in Bauchi State in Feb. 2013, and taken to the Sambisa Forest.

The News Agency of Nigeria (NAN) reports that they face an 11-count charge for the abduction and murder of the victims.

According to the charge, Christopher Mcmamus (Briton), Franco Lamoliara (Italian), Francis Colomp (French) and Edgar Fridz Rampach (German) were allegedly killed by the defendants after they were kidnapped from a construction site in Birnin Kebbi.

They were abducted on May 12, 2011 and detained at the Mabera area of Sokoto State until March 8, 2012 when they were allegedly killed by the defendants.

Mr Ameh Attah, counsel to some of the defendants while speaking to newsmen after the session said his clients had filed the application against his advice.

“They are the ones asking that the matter be transferred to another court. I tried to convince them that they should allow this court do the case to the end, but they said they have no confidence in the court.

“I cannot force them, I am only to do their wishes,'' he said.

Mr Aliyu Momoh, also a defendant's counsel said his client's insistence for the transfer of the case file was predicated on alleged double stance of the court toward justice.

“My reaction is that based on the application, it is proper to transfer the matter to the CJ to re-assign. They are complaining.

“In the first place. There was an application that they should be transferred from DSS to the Prison and the court so ordered.

“DSS did not transfer them. DSS or the prosecuting people brought an application requesting that they should be kept with DSS.

“The Court now made a second order that they should be so kept and the condition they are facing in DSS is excruciating.

“They are almost all sick and they want the matter to be transferred so that they can have a fair hearing,'' he said.

Mr Mohammed Labaran, the Prosecuting Counsel insisted that the actions of the defendants were simply geared toward prolonging the trial.

“As you are all aware, the Federal Government is disposed to speedy trial of all criminal cases.

“And all of you are witnesses to our application before the court. We are very consistent urging the court to ensure speedy trial in this case.

“All the same, justice is rooted on confidence like the Judge did say, so, since they said they don't have the confidence in the court, we are waiting for which Judge they would have confidence in.” NAN