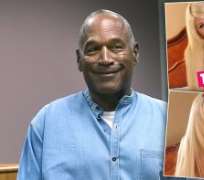 O.J. Simpson was released  on Sunday and RadarOnline.com has learned exclusively the disgraced NFL player plans to blow off his post-prison steam at a sleazy brothel in Nevada.

Bunny Ranch owner, Dennis Hof, says Simpson's longtime pal, Tom Scotto, reached out to him just days before his release in order to set up a special sexy celebration for the disgraced NFL star.

Hof revealed to Radar Scotto's plans to scope out the establishment to ensure it's Juice-worthy. “Scotto is going to come up here next week and check it out then go back down to Vegas,” he said. “Then we're all going to get together and hangout and party a little bit and have some fun with some gorgeous company.”

While the idea is hurriedly being put into action, Hof says there are still a lot of moving parts to the Bunny Ranch visit — “It all depends on O.J.'s schedules and meeting with the parole officers.”

But Hof assures, “It's going to happen, it's gonna happen.” He added, “The Bunny Ranch and the Bunny Ranch girls are anxious for O.J.'s visit.”

“That's the girl that Scotto has interest in and he of course thinks O.J. will like her too,” Hof gushed. “She is a stunner.”

Simpson, 70, was set free at 12:08 a.m. Sunday morning after serving nine years behind bars in Nevada's Lovelock Correctional Center for his 2008 crime. As readers know, Simpson was sent to jail after being found guilty for an armed robbery and kidnapping case against longtime friend Bruce Fromong. He was sentenced to a minimum of nine years in prison and a maximum of 33.